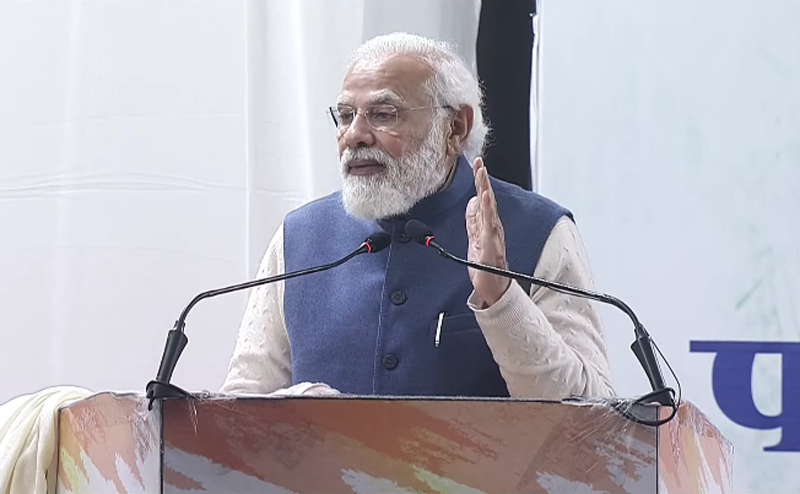 PM Modi inaugurates Netaji's hologram statue at India Gate, says efforts were made to remove contributions of many great personalities after independence

He said after independence was achieved actions were taken to remove the contributions made by many 'great personalities'.

What a proud moment for the entire nation!

We salute Netaji, one of mother India’s bravest sons.

A granite statue of Netaji will be placed later under the cupola where the statue of British monarch King George V once stood.

Addressing the gathering, he said that the grand statue of Netaji, who had established the first independent government on the soil of India, and who gave us the confidence of achieving a sovereign and strong India, is being installed in digital form near India Gate. Soon this hologram statue will be replaced by a granite statue.

"This statue is a homage to the hero of freedom by the grateful nation and will keep on reminding our institutions and generations the lesson of national duty," he said.

Speaking at the event, Modi said: "It was unfortunate that after independence,work was done to erase the contribution of many great personalities."

"Azadi Ke Amrit Mahotsav resolves that India will revive its identity and inspirations," he said.

This award was instituted by the Union Government to recognize and honour the invaluable contribution and selfless service rendered by the individuals and organisations in India in the field of disaster management.

The Prime Minister emphasized the need  to strengthen institutions to improve capacity to deal with disasters.

He cited examples of cyclones in Odisha, West Bengal, Goa, Maharashtra, Gujarat for illustrating the new preparedness as these disasters saw much lesser damage than earlier times.

He said that the country has an end to end cyclone response system, much better early warning system and tools of disaster risk analysis and disaster risk management.

The Prime Minister also highlighted India’s leadership in the sphere of disaster management at global level. In the CDRI- Coalition for Disaster Resilient Infrastructure, India has given a big thought and gift to the global community and 35 countries along with the United Kingdom are already part of the coalition.

The Prime Minister said Joint Military Exercises among armies are common in various countries of the world. But for the first time India has started the tradition of Joint Drill for Disaster Management.