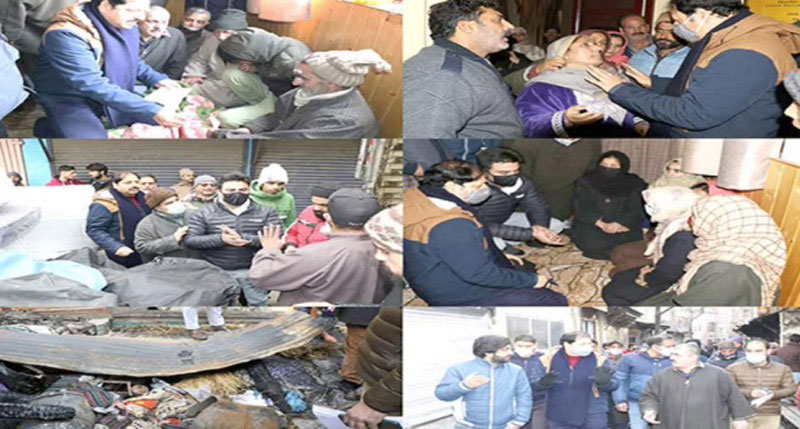 The ADC accompanied by Tehsildar South and other concerned officers met the fire victims whose residential houses got completely damaged in a massive fire incident on January 20, besides a 56-year-old woman lost her life in the unfortunate incident.

On the occasion, the ADC met the fire victims who have been provided temporary shelter in a nearby Community Facilitation Center. Interacting with the fire sufferers, the ADC expressed sympathies with them on behalf of the District Administration Srinagar.

He also expressed condolence to the bereaved family who lost their family member in the unfortunate fire incident.

He also assured that every kind of possible support shall be provided from the District Administration for their immediate rehabilitation.

The ADC was informed that several residential houses comprising 11 families were gutted in the devastating fire incident, besides 4 persons got severe injuries.

On the occasion, the ADC handed over Ex-gratia relief of Rs 4 lakh to the next of kins of the deceased women under SDRF.

While essential assistance in the form of 65 blankets, 52 mattresses, 52-bed sheets and 13 kitchen sets, besides Rs 55000 to 11 families was provided out of Red Cross as interim relief to the fire victims.

The ex gratia of Rs 20000 was also given to 4 injured persons. Further structure-wise financial assistance under SDRF is also being given to the affected families separately under the District Red Cross fund.

Meanwhile, the District Administration has appealed to the general public to follow all precautionary measures while handling electric/electronic gadgets, LPG cylinders and other appliances being used for heating and cooking purposes to avoid such incidents.