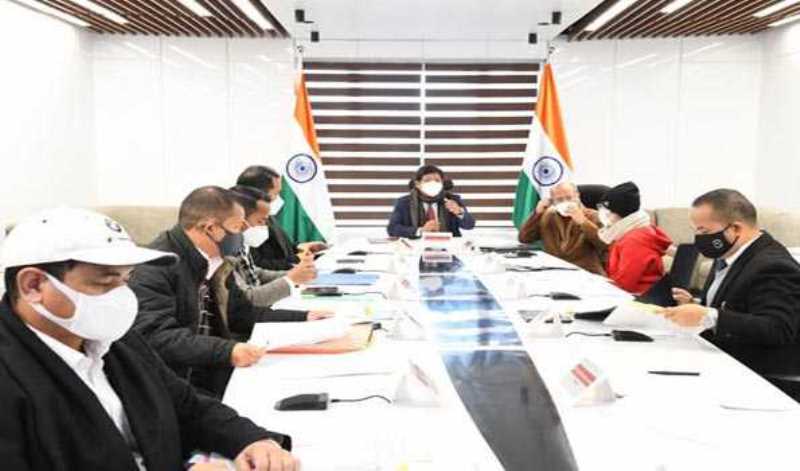 Shillong/UNI: Meghalaya Chief Minister Conrad Sangma and his Assam counterpart Himanta Biswa Sarma would leave for New Delhi on Thursday to meet Union Home Minister Amit Shah to present their respective positions on the inter-state boundary conflict in order to arrive at a lasting solution to the vexed issue between the two neighbouring states.

A resolution to six areas of difference out of the 12 along the Assam-Meghalaya boundary is expected to be arrived at by Jan 21 when Meghalaya would celebrate its 50th year of statehood.

“We will proceed to Delhi tomorrow (Thursday). Assam Chief Minister and I will submit the report to the Union Home Minister and since both the states have more or less agreed, I should say 100 per cent agreed on the report, we will be submitting more or less a common report and then I think the Government of India has to move according to the laws and the bill to be put up,” Sangma told journalists after the cabinet approved the draft resolution in resolving the disputes in 36 villages along the Assam-Meghalaya border on Wednesday.

“While that happens, administratively the two states will further discuss the nitty-gritty of the demarcation. So we can agree on villages but demarcating a border, these are aspects which are within the provisions of the parliament. The Survey of India will have to come in and joint inspections may have to be done and the bill has to be there,” he said.

The Chief Minister said that both Meghalaya and Assam governments are trying to bring peace and development in 36 disputed villages in the inter-state border by keeping “sentiments and willingness of the people”.

“Apart from historical facts, it is very important to keep the people’s sentiments in mind and therefore the willingness of the people in specific areas has been one of the main driving forces or the principles on which we have reached the conclusion,” Sangma said.

In these 36 villages, the demography is diverse and several tribes and communities that include Garos, Khasis, Rabhas, Nepali and Assamese communities reside there.

He said both the state governments felt strongly that reclaiming the areas against the wishes of the people residing there would not be fruitful.

“Any state government may try to claim some areas but the people living in those areas if they don't wish to be in that particular state, one cannot force people to come into a particular state,” Sangma said.

“This has been the basic driving principle for us and that is why we have gone down to the grassroots level and the committees have meticulously gone and visited every single of the 36 villages which were under dispute or differences in the six areas that were there,” he informed.

Moreover, both the state governments have stayed away from the concept of gaining area under its administration, but looked at the issues to resolve it more than anything else, Sangma said.

The Chief Minister said that having an approach to resolve the boundary dispute while also thinking of gaining the maximum land was the bane of earlier efforts.

Asked whether there would be a need to amend the NE Reorganization Act, Sangma maintained,

“We can have administrative units and administrative control over certain areas but the actual demarcation of boundary will have to be done by the parliament."