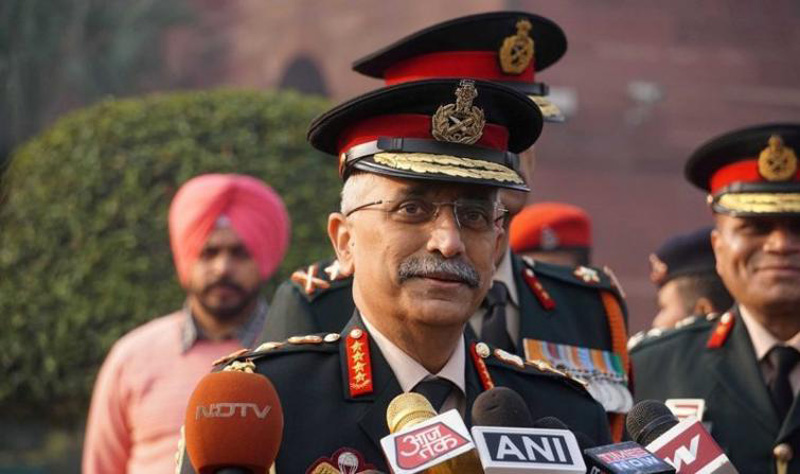 New Delhi/UNI: The Indian Army will not allow attempts to unilaterally change the status quo on the borders and the country's patience is borne out of its inherent strength and should not be mistaken otherwise, Army Chief General M M Naravane said on Saturday.

The General said this on the occasion of Army Day at the Cariappa Parade Ground here.

"The last one year has been very challenging for us. You are aware of the developments with China on our northern borders. To keep the situation under control, the 14th Senior Military Commanders level talks were held recently," he said.

"Due to joint efforts at different levels, disengagement has taken place from many areas. This in itself is a positive development. Our efforts will continue to resolve the current situation based on the principle of mutual and equal security," he said.

Accusing Pakistan of harbouring terrorists, Gen Naravane said around 300-400 terrorists in training camps across the border were waiting for a chance to infiltrate into Jammu and Kashmir but military operations along the Line of Control and the Army's strong Counter Infiltration Grid had foiled several attempts.

He said that cross-border attempts were being made to smuggle weapons by using drones.

"There has been a progressive improvement in ground conditions in the interiors of Jammu and Kashmir in the last two years. Terror outfits supported from across the border are trying to halt the development process.

"Targeting non-locals and poor laborers is part of this conspiracy. But incidents of violence have come down significantly due to the continuous efforts of the security forces," said Gen Naravane.

Army Day is observed to mark Field Marshal K M Cariappa taking over as the first Indian Commander-in-Chief of the Indian Army. The Indian Army is celebrating the day at all the Command Headquarters.