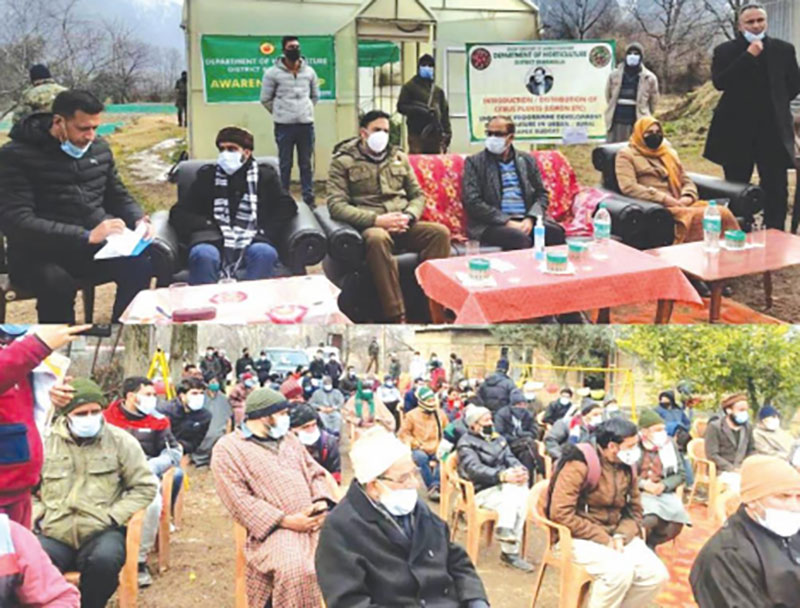 Srinagar/IBNS: The Director General (DG) Horticulture of Kashmir Ajaz Ahmad Bhat Friday toured the Uri, sub-division of Baramulla district, to participate in an awareness camp organized by the department at fruit plant nursery in Salamabad.

The camp was a part of an initiative to reach out to the people living in tribal and border areas.

At the outset, Chief Horticulture Officer for Baramulla apprised the participants about the present scenario of horticulture in sub-division Uri and elaborated in detail about the various government sponsored schemes offered.

Speaking on the occasion, the DG urged the farmers to come forward, associate with the department, and avail the benefits of different schemes.

The focus will be given on area-specific fruit plants and varieties as Uri, unlike the rest of the valley, has temperate as well as sub-tropical climatic conditions.

Regarding the ignored and far-flung areas, he said that they will be given their due share and will be provided technical and financial help.

Aijaz also distributed about 12,000 fruit plants of lemon, pomegranate, orange, and walnut among the farmers and instructed the Chief Horticulture Officer to import olive plants from Rajasthan and introduce new varieties in the area.