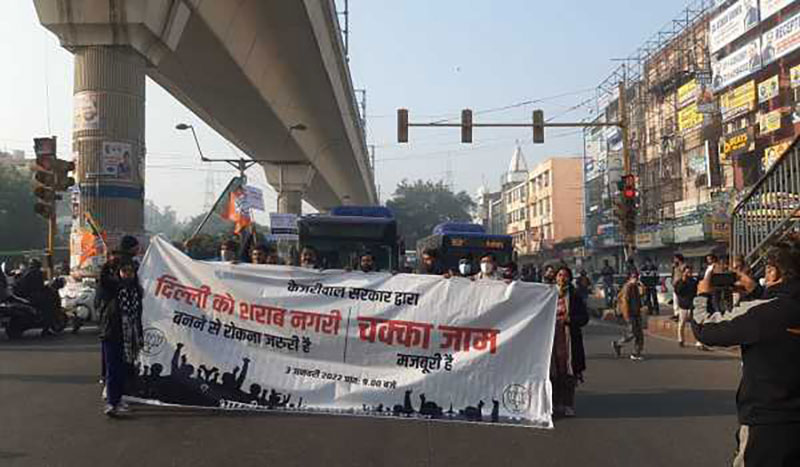 New Delhi/UNI: The Delhi unit of the Bharatiya Janata Party (BJP) took to streets here on Monday protesting against the Arvind Kejriwal government's decision to open more liquor shops across the capital.

Party workers attempted a 'Chakka Jam' in the Laxmi Nagar area of the busy Vikas Marg stopping vehicles by squatting on the road and shouting slogans.

They raised demands banning alcohol shops and any further issuing of licenses to open such counters.

Around 200 workers were seen rallying, sitting on the main road stopping DTC buses at traffic signals.

"Delhi ko sharab ki nagri nahi banne denge (will not allow this city to turn into an alcohol haven)" was being shouted.

None of the protesters, however, seem to remember it was COVID-19 times with an yellow alert in progress in the capital.

Similar protests were seen in Chhattarpur and Rajouri areas as well and several other crossroads.

Most of the protesters were seen without masks and not maintaining distance.

Cases of the new variant Omicron are surging in the city, as are daily cases of COVID-19.