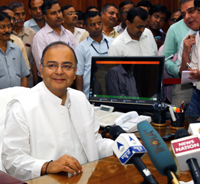 "The UPA was a practitioner of sadistic economy. It was vindictive in nature... India suffered in the last few years of UPA government due to this sadistic economy," Jaitley told reporters.

Natarajan is set to resign from the party, after shooting off an explosive letter to Sonia Gandhi (written in Nov last year) where she accused vice-president of the party Rahul Gandhi of interference in government work while she was a minister.

In her letter she said she took care of the requests of Rahul Gandhi but  faced "a hysterical vicious false and motivated campaign against me, in the media, orchestrated entirely by particular chosen individuals in the party."

"There was not a single word of truth in what was said, nor was there a single concrete fact," she said.

She said even after her resignation, she "received information that persons from the office of Shri Rahul Gandhi were calling the media and planting stories that my resignation was NOT for party work."

While Natarajan had been accused being a hindrance to major projects, she wrote in the letter: "I was never a bottleneck, nor was I ever responsible for unwarranted delays in major projects, and I can prove this at any time. I was shattered by the attack upon me, and bewildered. I wrote a passionate message to Shri Rahul Gandhi, about my removal as Minister, and his speech, at FICCI, and asked him what wrongdoing I had committed to warrant this treatment."

"I said, that I should have been asked for an explanation, IF I had done anything wrong, as even a murderer has his say in court, and here I don’t even know what, if any wrong doing was committed by me. I told him that my family legacy and my name would be forever ruined, and all I had done was my duty. I asked him to tell me, what wrong I had committed. I asked for time to meet him. He replied that he was “running a little busy” at that time, but that he would meet me a little later.

"Despite several requests, that day never came. Not till this minute. I took a break of 10 days, and went to my sister’s home to recover," she wrote.

She said over the last 11 months (till Nov when the letter was written), she had suffered the most excruciating mental agony, and have been continuously attacked, wrongly vilified and defamed in the media, and exposed to every possible humiliation in public life.