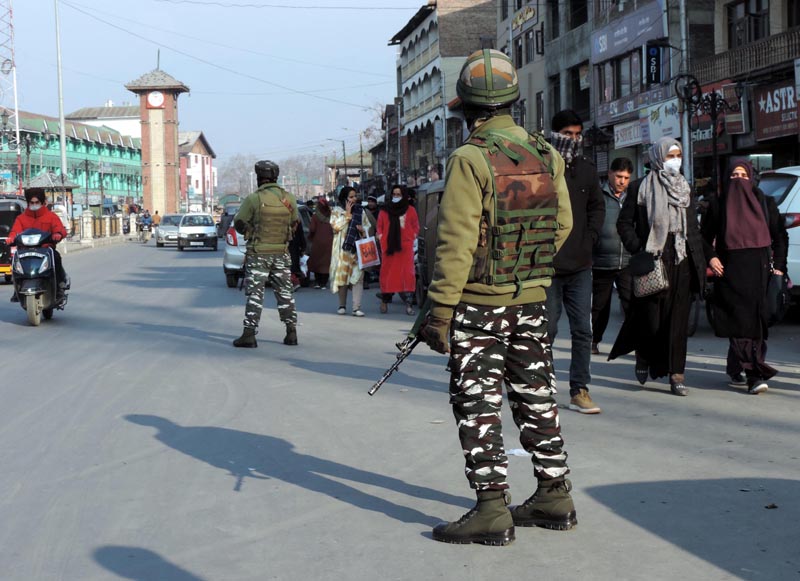 Srinagar: Three terrorists, including a one local who was allegedly part of the attack on the police bus at Zewan, were killed and four other security men were injured in an encounter on Srinagar outskirts at Pantha Chowk, officials said on Friday.

The nocturnal gunfight at Pantha Chowk erupted just hours after six Jaish-e- Mohammad militants and a soldier were killed in two separate encounters in South Kashmir.

Police told UNI news agency the gunfight at Pantha Chowk erupted when a joint team of forces launched a cordon and a search operation in the area following an input about the presence of suspects in the area.

"As the cordon was being laid, terrorists opened indiscriminate fire wounding four security men including three cops," a police officer said, adding the injured were shifted to Army's 92 base hospital." Three terrorists were killed in the subsequent gunfight."

In a series of tweets, police said three militants were killed and one of the slain militant was identified as Suhail Ahmad Rather of the Jaish-e-Mohammad.

"One of the killed #terrorists has been identified as Suhail Ahmad Rather of #terror outfit JeM. As revealed during yesterday’s PC ( press conference), terrorist Suhail was also involved in #ZewanTerrorAttack. All terrorists involved in Zewan attack have been #neutralised," a police tweet quoting Inspector General Police Kashmir said.

One of the killed #terrorists has been identified as Suhail Ahmad Rather of #terror outfit JeM. As revealed during yesterday’s PC, terrorist Suhail was also involved in #ZewanTerrorAttack. All terrorists involved in Zewan attack have been #neutralised: IGP Kashmir@JmuKmrPolice https://t.co/8qu081u8mV

On Thursday IGP had said the three Jaish militants including a Pakistan killed in Anantnag were part of the group involved in the attack on police bus at Zewan earlier this month that left three cops and nearly dozen others wounded.

"#SrinagarEncounterUpdate: In the initial exchange of fire, 03 Police personnel & 01 CRPF personnel got injured & were subsequently shifted to hospital..." an earlier tweet read.