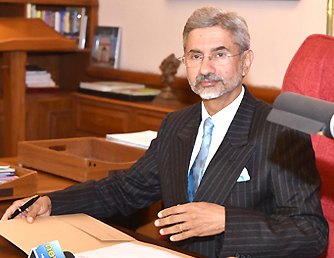 Jaishankar was the India's Ambassador to the US but his appointment has been criticised by the Opposition Congress.

The new foreign secretary on the questions by journalists on the suddenness of his appointment said: "As I take over, I am happy to work with all of you. I know that media is an important part of our Foreign Policy projection. So, I don’t think this is the time to get into to those kinds of questions. I really thank you all for being here today. I value your good wishes and I am sure we will have lot to do with each other.

Asked to outline his priorities, he said: "My priorities are the government’s priorities. So, I think at this time let’s leave it at that."

After a meeting of the Appointments Committee of the Cabinet, chaired by Prime Minister Narendra Modi, Jaishankar was appointed, with the decision following close on the heels of the three-day visit of US President Barack Obama to India.

Jaishankar is a 1977 batch officer who is the son of K Subrahmanyam, a well known strategic analyst.

While Congress asked why he was suddenly appointed despite his unquestionable competence, BJP defended the move.

"The government has the right to appoint any officer. Many of the previous governments have done this. I don't know why the Congress is making this a political issue. The Modi government wants to make India strong, " said BJP spokesperson Nalin Kohli.