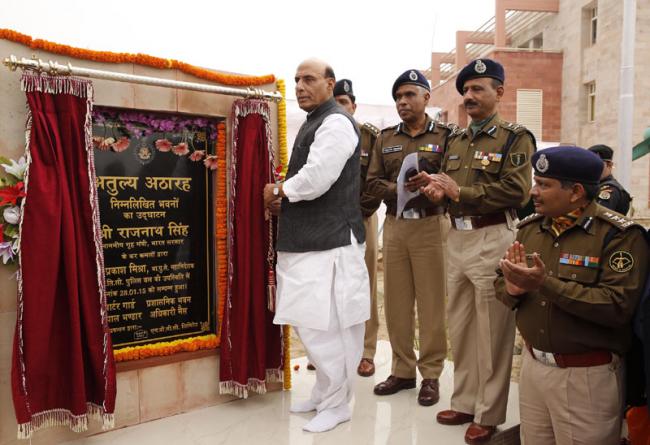 Addressing a function of the Indo-Tibetan Border Police (ITBP) in Kanpur , Singh said "There seems to be a difference of perception regarding the Sino-Indian border and that our efforts should be to come out with some solution to this problem."

He said that China should come forward, as India wants to solve this problem.

Singh said that India is the only country that considers the entire world as its family, but some countries did not like the strengthening ties between India and the US.

The Union Home Minister said that very soon mobile tower facility would be started at border that will enable jawans serving at borders to talk to their family members at home through phones.

Singh said that permission to install 134 mobile towers has been given.

Singh also said that he recently visited Israel and saw that modern technology was used by Israel to guard its borders.

Lauding ITBP, Singh said that the ITBP has also tried its best to start e-office and going for maximum digitalization.

The Union Home Minister said that during his tenure of last 7-8 months, he has understood several problems being confronted by ITBP personnel.

Noting that the entire life of ITBP jawans is spent while serving on snow and mountains, Singh assured that the ITBP jawans must get benefits of rotational transfer, so that besides serving at tough and inhospitable hilly terrain, the ITBP jawans get an opportunity to serve at plains as well.

Commending the ITBP’s illustrious history, Singh said that in the last 52 years of its service the ITBP has scripted a great success story for itself.

Singh said that if the Himalayas is guarding us then this is also the fact that ITBP jawans are the ‘Himalaya Putras’.

Singh also recalled the bravery of the ITBP jawans during the terror attack at the Indian consulate in Afghanistan.