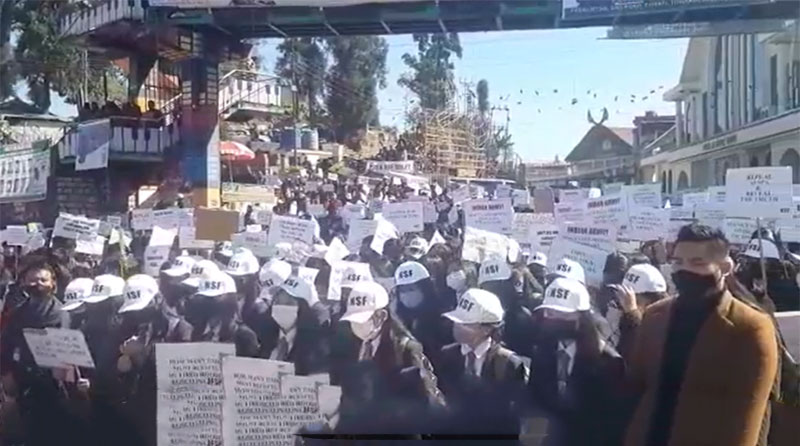 New Delhi/IBNS: The massive agitation against the killing of 14 civilians in a botched-up army counter-insurgency operation in Nagaland's Mon district has reached the capital Kohima.

Thousands took to the streets in a giant rally organised by the influential Naga Students Federation (NSF). Participants demanded justice for those who died and the repeal of the controversial AFSPA or the Armed Forces Special Powers Act.

The agitators held banners and placards that read "how many times must bullets be fired before repealing AFSPA", "AFSPA rears devil in the Indian armies" and "ban AFSPA, not our voice".

The protest gathering holds significance as this is the third consecutive day of agitation and also marks the escalation of Naga people's outrage.

The ENPO, like the Konyak Union, resolved to "abstain from any national celebrations", promised "non-participation in Army civic programmes" and said it would not allow recruitment drives in the area, NDTV reported.

Yesterday,  a dawn-to-dusk bandh was called in Mon district, government and private offices were shut, and vehicular traffic was disrupted.

The agitators are demanding the immediate arrest of the soldiers involved in the firing and withdrawal of Hime Minister Amit Shah's "false" and "fabricated" statement given in Parliament on December 6.

Shah had said the Army unit opened fire because the truck carrying the villagers accelerated when ordered to stop. The soldiers, suspecting insurgent activity, opened fire, he said.

No arms or ammunition were recovered from them, or from the truck, and all those in the vehicle were found to be coal miners.

In the violence that followed over the next 48 hours, eight more villagers and a soldier were killed.

The Army has expressed its regret over the killings and an internal investigation, led by an officer of Major-General rank, is underway, while the soldiers involved face a murder case filed by the police.