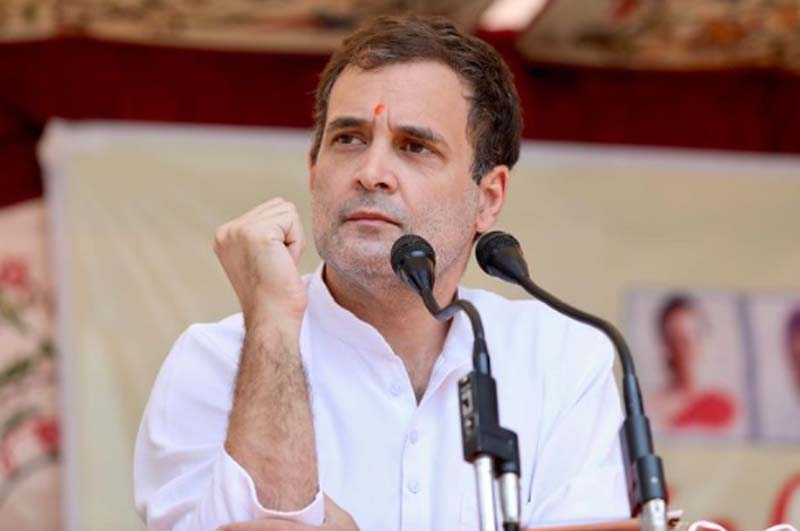 I am 'Hindu', not 'Hindutvavadi': Rahul Gandhi

Jaipur/UNI: Former Congress president Rahul Gandhi on Sunday called upon people of the country to 'uproot' the ruling BJP government at the Centre, which he termed 'Hindutvavadi' and accused it of having just one motive, to remain in power.

"In today's politics, there are two words- 'Hindu' and 'Hindutvavadi'. 'Hindu' always tries to find truth and its path is 'Satyagraha', while 'Hindutvavadi' does not care about truth and only wants to remain in power. A 'Hindutvavadi' shot Mahatma Gandhi. Since 2014, there is 'Hindutvavadi' rule in the country, we have to uproot it and bring the 'Hindu' regime back," said Gandhi, while calling himself an ardent 'Hindu' at 'Mehangai Hatao Rally,' held against price rise here.

Stating that he was not greedy of power, the Congress MP vowed to continue his fight against 'Hindutvavadi'.

"Whether I will get power or not, I will always remain a 'Hindu' and my fight against 'Hindutvavadi' will continue," he said, while addressing the gathering, in presence of Congress president Sonia Gandhi, Rajasthan Chief Minister Ashok Gehlot and other senior party leaders.

Highlighting demonetisation, GST, unemployment and price rise, which he claimed has affected the people of the country, took a dig at the Narendra Modi-led government at the Centre, accusing it of not caring about the public.

Attacking the Centre over 'farm laws', which were repealed recently, Gandhi said, "First they back-stabbed (farmers) and then 'apologised', but can't give compensation. This is the thought of 'Hindutvavadi'."

Congress has been demanding the Centre to compensate the family members of those killed during the farmers protest, besides giving job to one member of each family, which lost their loved ones during the agitation.

"There are two types of governments, one which serves the people and another, which is greedy and liar. Modi government is the second type," she said. The Congress leader also accused the Centre of favouring some 'industrialists'.

Senior Congress leader and former Haryana Chief Minister Bhupender Singh Hooda, in his address said, "The government should immediately withdraw all the cases registered during the farmers' protest and compensate the families, who lost their loved ones, besides giving them job.

"If raising farmers, price rise and Chinese issues is crime, then we will repeatedly commit this crime," senior party leader Mallikarjun Kharge said at the rally over suspension of 12 Opposition MPs in the Rajya Sabha.

Congress observed a two-minute silence for Chief of Defence Staff (CDS) Gen Bipin Rawat and others who died in Coonoor chopper crash in Tamil Nadu, besides for those who lost their lives in farmers agitation, at 'Mehangai Hatao Rally'.