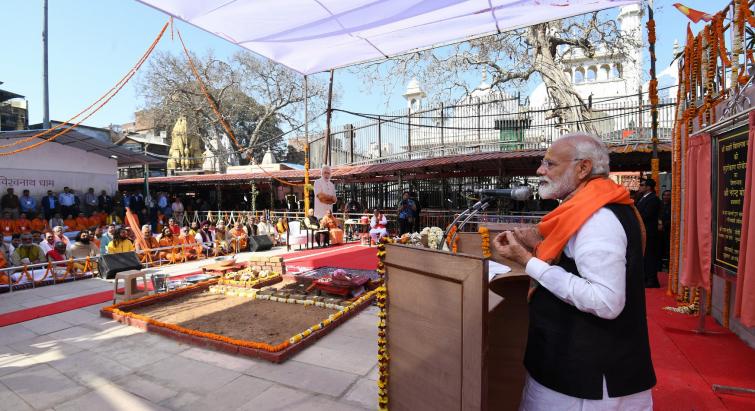 Varanasi/UNI: Come Dec 13, the eternal city of Kashi, which is emerging in a new avatar like a Phoenix, will witness Prime Minister Narendra Modi dedicating the newly-constructed complex of Kashi Vishwanath Dham to the people, especially the pilgrims, who face a lot of difficulties, while trying to have 'darshan' of Lord Shiva and Goddess Annapurna here.

This rejuvenation of the abode of Lord Shiva, which has been witness to the ups and downs, destruction and creation in its long history, is being realised after about 250 years. Maharani Ahilyabai Holkar of Indore was instrumental in rebuilding the Kashi Vishwanath temple, which was demolished by Mughal ruler Aurangzeb.

The ruins lying the adjoining Gyanvapi Mosque took the form of a small but magnificent temple in 1777-80 by the marathon efforts of the Queen.

After winning the Lok Sabha elections from Varanasi in 2014, Modi had come to worship at Kashi Vishwanath temple.

Due to the VIP arrangements, a high-profile person seldom anticipates the difficulties faced by common devotees during darshan and pujan.

But Modi assessed how difficult it must be for an ordinary devotee to reach the campus, negotiating a narrow lane and performing darshan on a normal day.

During festive seasons like Shivaratri and the month of Shravan, the ordeal of devotees became worse.

It was an odd challenge for the worshippers who came to Kashi from the country and abroad, to take a dip into the holy Ganga and have darshan of their Lord at Kashi Vishwanath temple smoothly. Apparently, this was the genesis of Modi's "Sugam Darshan-Poojan" mantra.

It is a coincidence that 118 years ago, an unknown Gujarati barrister from South Africa faced a similar difficulty while performing darshan at the Kashi Vishwanath temple. He was enraged by the filth, disorder and greedy behaviour of the pandits (priests) in the temple.

Unknown at that time in India, this devotee later came to be known as Mahatma Gandhi. Bapu was of the view that spiritual realisation and inner peace cannot be felt amidst an unhygienic and chaotic environment.

Modi, another Gujarati, took the initiative to restore the pristine glory to this religious complex.

During the Emergency (1975-77), a suggestion was made to widen the Vishwanath Gali, the main lane leading to the temple. This suggestion could not be implemented even during that period when state machinery was all powerful.

In 1983, after the gold theft incident in the temple, the state government took over the temple management. For the acquisition, orderliness and convenient worship in the temple were cited as the main reasons.

But in the last three-four decades, not much work has been done in the direction of easy access to the temple and establishing civic amenities around it.

After the Babri mosque demolition in Ayodhya in 1992, the security of Kashi Vishwanath Temple-Gyanvapi Masjid complex became the main concern for the administration. Security forces were deployed and metal detectors were installed on all entry points and lanes leading to the temple.

A 24-hour security arrangement was made, along with erection of a watch tower on the campus. Presence of security personnel and their vehicles, in a small densely populated area with dilapidated houses, made the situation more difficult for pilgrims.

The city once again got state patronage in 2014. In earlier days, philanthropists and kings from all over India had contributed to the development of Kashi by constructing Ganga ghats, dharamshalas and palaces.

Later, the city lost such state patronage and societal support. The new political dispensation, with the Modi government at the Center and the Yogi Adityanath government in Uttar Pradesh, put development and restoration as their priorities.

Kashi Vishwanath Dham project started in February 2020, and was completed in a record time. Work was undertaken on a war footing and the project was completed on the eve of Uttar Pradesh Assembly elections.

The temple is directly connected to the three Ganga ghats- Lalita, Manikarnika and Jalasena. Various facilities have been created for the visitors in this corridor from the temple to Ganga ghats.

In front of the temple, there is Mandir Chowk and on either sides of the corridor, three Passenger Facilitation Centers and Bhogshala, Vedic Center, Spiritual Book Store, city Museum, Mumukshu Bhawan, Varanasi Gallery, Multi-Purpose Auditorium, Tourist Facilitation Center, Cafeteria and Guest House have been built. There will also be a jetty on the Ganga Ghat.

For this ambitious project, about Rs 500 crore were spent for the purchase of land, while the project cost was about Rs 350 crore.

Prime Minister Narendra Modi had two dream projects, including Kashi Vishwanath Dham in Varanasi and the Central Vista Project in the national capital.

The administration has taken all care that the religious and spiritual character of this area is protected. The small temples and deities, which emerged during demolition works, have been preserved and they are being consecrated.