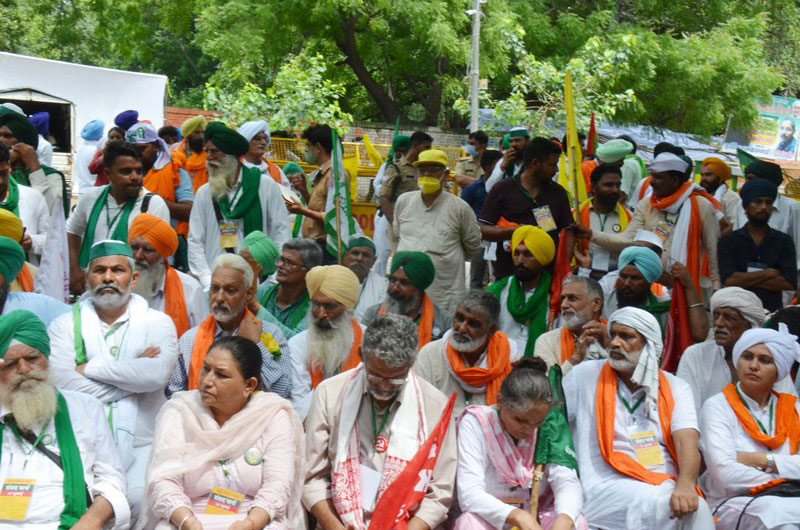 New Delhi/IBNS: Farmers protesting for more than 15 months on issues ranging from the now-scrapped farm laws to a legal guarantee for Minimum Support Price (MSP), have decided to withdraw the same.

According to reports, the Centre has indicated to offer a written assurance to meet their demands.

A meeting of farmer leaders from the Samyukt Kisan Morcha was held Tuesday evening at Singhu on the Delhi border.

The meeting, to consider the Centre's offer, concluded without an agreement on the strategy ahead, and will resume at 2 pm on Wednesday.

"The Centre was open to giving farmers written assurances on demands that include a legal guarantee for MSP and the dropping of all police cases against them, including those on stubble burning," NDTV reported quoting sources.

"Sources said the centre, as part of its offer, would form a committee to decide the MSP issue. The committee will consist of government officials, agriculture experts and representatives from the Samyukt Kisan Morcha, the umbrella body of farmer unions that has led this protest," it further added.

Congress MP Rahul Gandhi earlier in the day reiterated his demand to compensate the farmers, who had lost their lives during the farm agitation.

"I want the families of farmers, who died during the farmers agitation, to get their due. The government should compensate and give jobs to them," the former Congress president said, while raising the farmers issue during Zero Hour in the Lok Sabha.

Taking a dig at the Centre on Union Agriculture Minister Narendra Singh Tomar's statement in the House over farmers death, Gandhi said, "On November 30, the Minister said there was no data on farmers who died in the farmers' agitation.

"However, our Punjab government gave an ex-gratia of Rs five lakh each to the family members of 400 ryots who died in the agitation, and jobs to 152. We have another list of 70 farmers from Haryana."