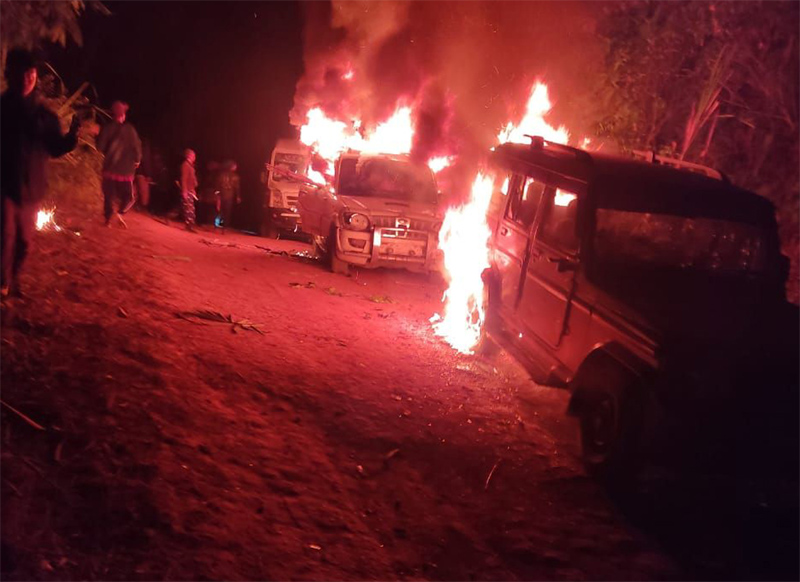 Kohima/New Delhi/UNI: Thirteen civilians and a security force personnel were reportedly killed at Oting village, in Mon district of Nagaland, as security operations went awry, evoking tension and disturbance in the area with protestors trying to burn down an Assam Rifles camp, sources said on Sunday.

While there has been no official confirmation of the number of civilian deaths, unconfirmed sources claimed the figure was 13.

State Chief Minister Neiphiu Rio called the incident - which happened on Saturday - unfortunate and announced the formation of a Special Investigation Team (SIT) to look into the happenings.

The Army, in a statement, said the incident is "deeply regretted", while Union Home Minister Amit Shah expressed anguish and assured justice to the bereaved families.

The civilians were reportedly killed by security forces who were looking for suspected underground cadres of the NSCN(K) in Oting village under Longkhao area of Tizit Sub-division in Mon district around 4 PM on Saturday.

The incident was reported on Sunday.

At least 20 soldiers were also injured in the incident.

However, the local organisations said 14 civilians are missing and the 'Army personnel were seen carrying the dead bodies till late (Saturday) night'.

According to official sources, the internet service has been restricted throughout the district as a precautionary measure.

The situation in Mon district reportedly worsened on Sunday as a 20,000-30,000 strong mob tried to burn down the camp of 27 Assam Rifles in protest.

According to sources in the Tiru area, the mob – carrying guns and other weapons - started assembling in the town and marched towards the Assam Rifles camp from different areas.

The raiders set fire to some portions of the camp, which compelled the Assam Rifles personnel to resort to blank fire.

Demanding the para-military force hand over those who had reportedly opened fire on the daily wage labourers on Saturday, the mob stood in front of Assam Rifle camp.

However, the troopers are reportedly safe, sources said.

The Mon district is dominated by the Konyak tribe.

Protestors earlier attacked the security forces and set some of their vehicles on fire. Senior police officials have rushed to the area and an investigation has been initiated, sources said.

Army sources said they are still collecting the information on the operation that was going on against some underground armed cadres present in the area.

The injured jawans have been admitted to Dinjan Army Hospital in the Dibrugarh district of Assam.

Senior police officers rushed to the area and investigation over the killing of civilians is ongoing, civil sources said.

Eyewitnesses alleged that the security forces fired upon a pick-up truck that was carrying daily wage labourers of colliery who were returning home after their day’s work at a coal mine from the Tiru area.

In a statement, the Army said they were moving based on "credible intelligence”.

"Based on credible intelligence of likely movement of insurgents, a specific operation was planned to be conducted in the area of Tiru, Mon District, Nagaland," the Army said.

"The incident and its aftermath are deeply regretted. The cause of the unfortunate loss of lives is being investigated at the highest level and appropriate action will be taken as per the course of law. The security forces have suffered severe injuries in the incident including one soldier who succumbed to the injuries," said the statement.

Condemning the incident, Rio announced a Special Investigation Team will be formed.

"The unfortunate incident leading to the killing of civilians at Oting, Mon is highly condemnable. Condolences to the bereaved families & speedy recovery of those injured. High-level SIT will investigate & justice delivered as per the law of the land. Appeal for peace from all sections," said the Chief Minister.

Union Home Minister Amit Shah said, "Anguished over an unfortunate incident in Nagaland’s Oting, Mon. I express my deepest condolences to the families of those who have lost their lives. A high-level SIT constituted by the state govt will thoroughly probe this incident to ensure justice to the bereaved families."

The incident also drew sharp reactions from the Opposition. Congress leader Rahul Gandhi slammed the Home Ministry for the incident, and said, "This is heart-wrenching. GOI must give a real reply. What exactly is the home ministry doing when neither civilians nor security personnel is safe in our own land?."

West Bengal Chief Minister and Trinamool Congress chief Mamata Banerjee called it "worrisome news" and demanded a thorough probe to “ensure that all victims get justice”.