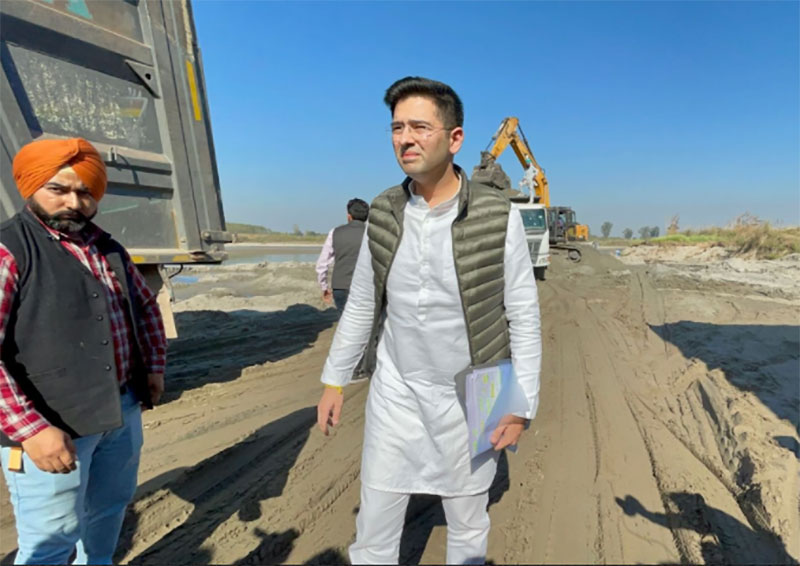 Chadha reached Jindapur village of Chamkaur Sahib assembly on Saturday and raided the site of the sand mafia which was running unopposed for a long time.

The AAP leader accused the Chief Minister of wrongly transferring a forest officer and said, “On November 22, 2021, Forest Officer Rajvansh Singh had written a letter to the SHO and Tehsildar here, informing that this area of Jindapur village was under the 'Forest Conservation Act'. Where no illegal mining activity can be carried out.

"On November 23, a day after writing the letter, the Channi government ordered the transfer of that honest forest officer. This proves that the sand mafia is working under their protection and Chief Minister Channi is in association with the sand mafia.

"About 800 to 1,000 trucks of sand are illegally supplied daily from here. The forest officer had said in his letter that this land belongs to the forest department and mining cannot take place here, but the mafia did illegal mining and also destroyed the plants planted by the forest department while the administration kept sleeping.”

He said Channi should tell everyone for how long illegal mining is continuing in Punjab? How much of its share reaches his pockets? How many such mafia sites are there in Chamkaur Sahib and all over Punjab? And what is their nexus with the mafia?

Chadha said, “Chief Minister Channi lies that entire Punjab gets sand at Rs 5 per ft. Whereas the truth is that due to the sand mafia people have to buy sand at the rate of Rs 25 to 40 per feet.”

Targeting the Chief Minister, he said that seeing the sand mafia, it seems that the cat itself is guarding the milk.

He said that there is a sand mafia business in Punjab worth about Rs 20,000 crores. “After eliminating these sand mafia, the Aam Aadmi Party government will give an allowance of Rs 1,000 to the women of Punjab and with the same money AAP will provide free world-class education and medical services to the people,” he added.