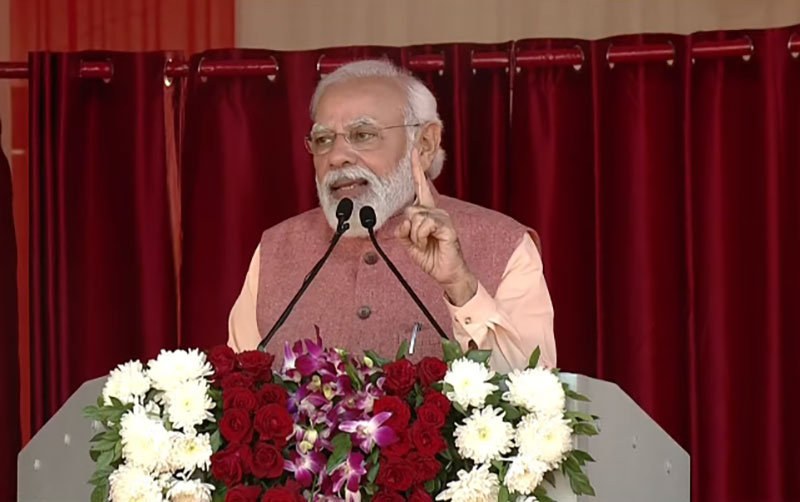 New Delhi: PM Narendra Modi on Saturday inaugurated and laid the foundation stone of various projects worth around Rs 18,000 crore in Dehradun.

He inaugurated seven projects which focus on making travel safer by tackling the problem of chronic landslides in the region, road widening project from Devprayag to Srikot, and from Brahmpuri to Kodiyala on NH-58, 120 MW Vyasi Hydroelectric Project, built over River Yamuna, Himalayan Culture Center at Dehradun and State of Art Perfumery and Aroma Laboratory (Centre for Aromatic Plants) in Dehradun.

Addressing the gathering, the Prime Minister said that Uttarakhand is not just the centre of faith but is the symbol of hardwork and determination also.

"That is why, development of the state is one of the foremost priorities of the ‘double engine government’ of the centre and the state," Modi said.

He emphasized that at the beginning of this century, Atal ji started a campaign to increase connectivity in India.

However, the Prime Minister said,  after that for  10 years there was such a government in the country, which wasted valuable time of the country and Uttarakhand.

He continued , “For 10 years there were scams, scams in the name of infrastructure in the country. We worked twice as hard to make up for the loss caused to the country and are doing it even today.”. Talking about the changed working style, the Prime Minister said “today, India is moving ahead with the intention of investing more than Rs 100 lakh crore on modern infrastructure. India's policy today is of ‘Gatishakti’, to work twice or thrice as fast.”

Dwelling on the benefits of connectivity, the Prime Minister said before the Kedarnath tragedy, in 2012, 5 lakh 70 thousand people had darshan.

It was a record at that time. Whereas before the start of the Corona period, in 2019, more than 10 lakh people had come to visit Kedarnath.

“The reconstruction of Kedar Dham has not only increased the number of devotees coming for darshan, but has also provided many opportunities for employment and self-employment to the people there,” he added.

“When it is ready, then the time taken to travel from Delhi to Dehradun will be almost half”, he informed. “Our mountains are not only strongholds of faith and our culture, they are also the fortresses of our country's security. One of the top priorities of the country is to make life easier for the people living in the mountains. Unfortunately, for those who remained in the government for decades, this thought was nowhere in the policy-thought,” he said.

Comparing the pace of development, the Prime Minister pointed out that between 2007 and 2014, the central government built only 288 km of national highways in Uttarakhand in seven years.

"Whereas the current government has constructed a national highway of more than 2 thousand kilometers in Uttarakhand in its seven years," Modi said.

The Prime Minister lamented that the earlier governments did not work on the infrastructure of the border hill areas as seriously as they should have.

Modi said that on critical issues like One rank, one pension, modern weapons, give a befitting reply to terrorists, were not attended propoerly and that demoralized the army at every level.

“The government which is in place today cannot come under the pressure of any country in the world. We are people who follow the mantra of nation first, always first,” he added.

The Prime Minister criticized the politics of pampering only one caste, religion and discrimination in development policies.

He also attacked the perversion of politics that does not allow people to be strong and make them dependent on the government for their needs.

This is the path - Sabka Saath - Sabka Vikas. We said that whatever schemes we bring, we will bring it for everyone, without discrimination.

"We did not make vote bank politics the basis but gave priority to the service of the people. Our approach has been to strengthen the country,” the Prime Minister stressed.