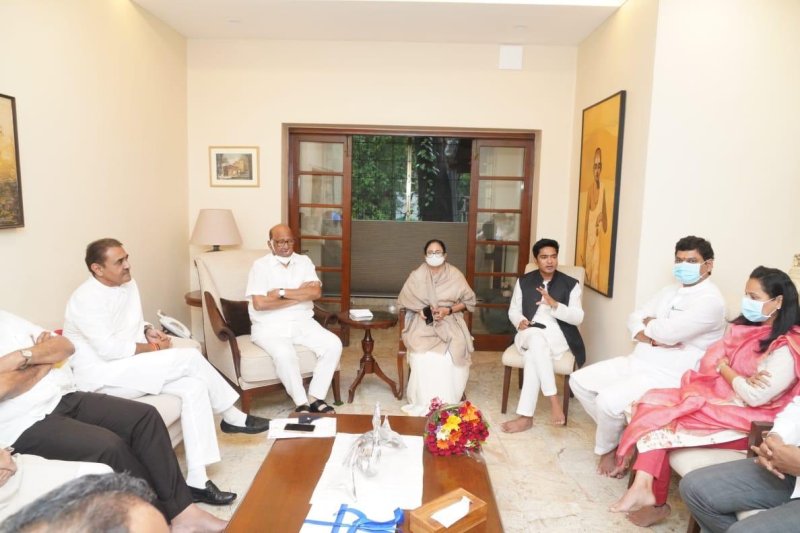 'What is UPA? There is no UPA': Mamata Banerjee in Mumbai

The meeting comes amid her political ambition of eyeing a fresh opposition line-up for the next general elections.

Banerjee made clear that this is being done because the Congress is not fighting against "the ongoing fascism".

"What is UPA? There is no UPA," Banerjee declared after her meeting with Sharad Pawar in Mumbai this afternoon.

Pawar, who was a key player of bringing together opposition ahead of the 2019 contest, said it out: "Template for 2024".

"A firm alternative course should be made as nobody is fighting against ongoing fascism. No one can do this alone. Whoever is strong in whichever place has to fight. Sharad ji is the senior-most leader and I came to discuss it as a political courtesy," she said.

On being asked about an alternative without the Congress, Banerjee said, "I agree with whatever Sharad ji said. We need a strong alternative that can fight. If someone does not want to fight what can we do? We want everyone to fight together on the field."

She has been catapulted onto the national stage since her mega victory against the BJP in the April-May assembly elections in Bengal.

Asked if Pawar should lead the UPA, she shot back: "What UPA? There is no UPA now? What is the UPA? We will clear all issues. We want a strong alternative."

Pawar tweeted photos of their meeting, commenting that they had "agreed upon the need to strengthen the collective efforts and commitment towards safeguarding democratic values".

Pleased to meet Hon'ble CM of West Bengal Smt @MamataOfficial at my Mumbai residence. We Discussed various issues. We agreed upon the need to strengthen the collective efforts and commitment towards safeguarding democratic values and ensuring the betterment of our people. pic.twitter.com/ryrVH2hD6N

Many believe that Banerjee will now be pitched as the face of the opposition.

The perception that is reinforced by her is to make Trinamool Congress the next big national party after the Congress, with several leaders joining her party from multiple states -- Goa, Meghalaya, Bihar and Haryana.

Earlier in the day, Mamata Banerjee attended a meeting of civil society members in Mumbai.

Banerjee is undertaking trips to various states in a bid to expand her TMC beyond West Bengal, where her party decimated the BJP in the 2021 assembly elections.