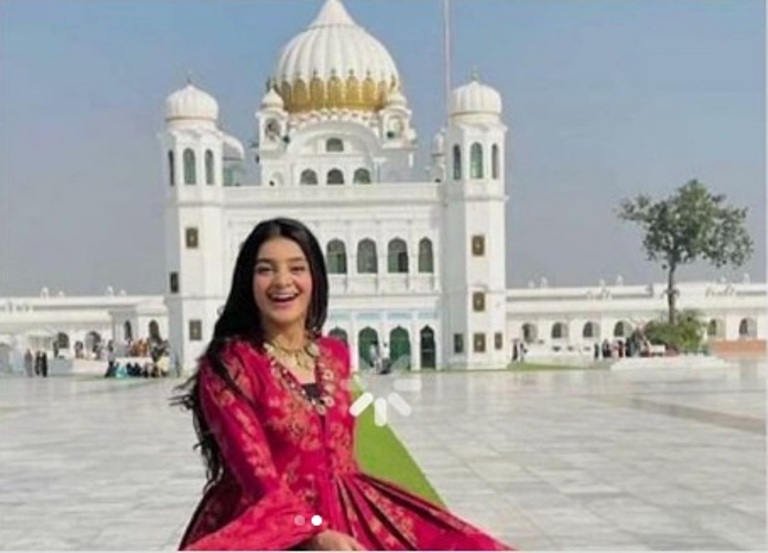 New Delhi/IBNS: India has summoned Pakistan's Charge d'Affaires to convey deep concerns over the incident of "desecration of the sanctity of Gurdwara Shri Darbar Sahib in Kartarpur" by a Pakistani model and a clothing brand.

The Pakistani model's photoshoot at Gurdwara Darbar Sahib in her country has been slammed widely for hurting sentiments of Sikhs.

The model, Sauleha, was seen bareheaded in the photos posted on Instagram.

Covering one's head in a gurdwara is mandatory.

"Pakistani Charge d'Affaires was summoned today to convey our deep concern at the incident of desecration of the sanctity of Gurdwara Shri Darbar Sahib, Kartarpur by a Pakistani model and a clothing brand," Foreign Ministry spokesperson Arindam Bagchi said in a statement.

"It was conveyed that this reprehensible incident has deeply hurt the sentiments of the Sikh community in India and worldwide. Such continued incidents of desecration and disrespect of places of religious worship of the minority communities in Pakistan highlight the lack of respect for the faith of these communities," the statement said.

"It was further conveyed that we expect Pakistani authorities to sincerely investigate this matter and take action against those involved," it said.

Our response to media queries on the incident of desecration of the sanctity of Gurudwara Shri Darbar Sahib in Pakistan: https://t.co/DhvUoxtpo0 pic.twitter.com/29afxbsKZ3

Modelling bareheaded for ladies' attire, in the premises of Gurdwara Sri Darbar Sahib at #KartarpurSahib in Pakistan, by a Lahorite woman, has several hurt the religious sentiments of Sikhs. Further the pictures were uploaded on social media.@ImranKhanPTI @MORAisbOfficial pic.twitter.com/i5RX01kWGo

Sauleha later deleted the photos and posted an apology on her Instagram page. In her apology, she said she did not intend to hurt anyone.

"Recently I posted a picture on Instagram that was not even a part of a shoot or anything. I just went to Kartarpur to learn about the history and know about the Sikh community. It wasn't done to hurt anyone's sentiments or anything for that matter. However, if I have hurt anyone or they think that I don't respect their culture, I am sorry," she wrote in her Instagram post.

The clothing brand has also clarified that the pictures were not part of a photoshoot.

Pakistan's Information Minister Fawad Chaudhry said the designer and the model must apologise to the Sikh community. "Kartarpur Sahib is a religious symbol and not a film set," he tweeted.