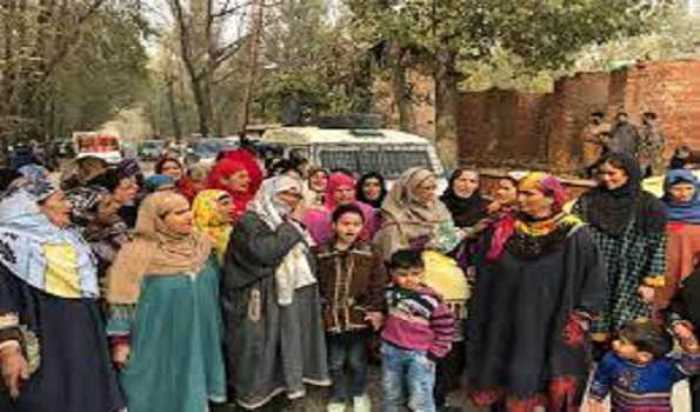 Srinagar/UNI: Farmers of South Kashmir's Pulwama on Monday staged a protest demonstration at Press Enclave on Residency road here against the "transfer of land" for establishing a Central Reserve Police Force (CRPF) camp.

Demanding justice from the authorities, the farmers said “The land comprising about 100 Kanals is a farm land belonging to us on which we have been farming for the past 150 years."

They appealed LG Manoj Sinha to repeal the order as the land is the only source on which they can earn their livelihood.

“Where will our children go, if the land is given to the CRPF”, the farmers questioned.

The farmers also appealed to Prime Minister Narendra Modi to intervene so that the order can be repealed immediately.

“Prime Minister in Mann Ki Baat openly says whatever is possible for farmers we are ready to do” a farmer said while seeking justice from the prime minister during the protest.

The farmers had met Union Minister Jitendra Singh in Jammu and apprised him about the documentation of the land.

They said, the minister told us that on government papers it has been shown as open land and not belonging to anyone.

“We have genuine documents of the land including “Intikhaab”, the farmers claimed that they told the Union Minister about in Jammu.

They claimed that in 1967 the then government had sanctioned the land for irrigation. “How could it be an open land, it was not possible under the government order for irrigation," an elderly farmer said.