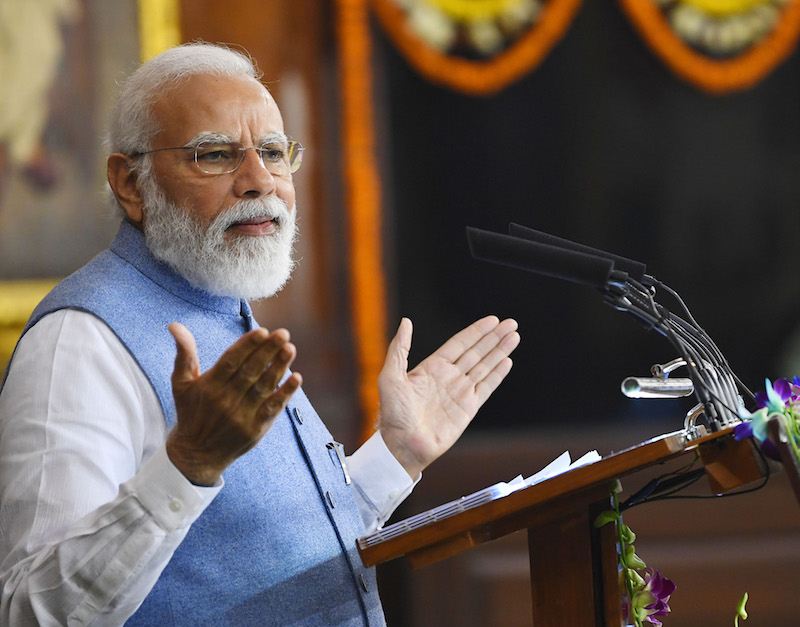 New Delhi, Nov 28 (UNI) Prime Minister Narendra Modi on Sunday said India is leading in the world of Start Ups today and the Start-ups are getting record investment year after year.

"Prior to 2015, we only had 10-15 startups, however according to a recent report, India has over 70 startups who have crossed the one billion dollar valuation mark in the last 10-12 months amid the pandemic," the Prime Minister said during his 83th Maan Ki Baat programme on All India Radio.

He added that the sector was progressing very fast and its reach has increased even in small towns of the country. The Prime Minister said the Indian youth is also contributing to the solution of global problems through start-ups.

He spoke to Mayur Patil, who along with his friends, have tried to put forward a solution to the problem of pollution. "This is the turning point of India's growth story, where people are not only dreaming of becoming job seekers, but also becoming job creators and this will further strengthen the country's stature on the global stage," he said.

During the programme, the Prime Minister also talked about the Ayushman Bharat scheme.

"Ayushman Yojana is for the poor, middle class, and for the ordinary families," he added.

Modi also spoke to two beneficiaries, who got their treatment done with the help of Ayushman Bharat scheme. Rajesh Kumar Prajapati had an ailment of heart. He recounted how he came to learn about the scheme and how it helped him minimise his expenses.

"With the help of Ayushmann Bharat Digital Health Card, I want to encourage more people like Rajesh Kumar Prajapati to come forward, reap the benefits through this card and promote it among the marginalised communities, who need it the most," Modi said.

In his conversation with another beneficiary Sukhdevi, who had been ailing with Arthritis, the Prime Minister said Ayushman Bharat scheme envisages in giving the gift of good health to everyone.

Touching on the topic of Vrindavan, Modi said Vrindavan is a tangible manifestation of God's love and it has been attracting people from all over the world. He also mentioned the Australian city of Perth, housing an art gallery called Sacred India Gallery.

"This gallery has been set up in the beautiful region of Swan Valley and it is the result of efforts of a resident of Australia, Jagat Tarini Dasi," he said.

"Jagat Tarini is an Australian, who came to Vrindavan and spent more than 13 years there. In order to stay spiritually connected with Vrindavan, she created Vrindavan in Australia itself," added the Prime Minister.

He said people who come here get an opportunity to view myriad artefacts. They get to see the glimpses of famous pilgrimage centres of India and the traditions and culture of Vrindavan, Nabadwip and Jagannathpuri.

Talking about Amrit Mahotsav, he said the resonance of Amrit Mahotsav has spread throughout the country, from Panchayats to Parliament.

Modi also expressed happiness over the successful organising of programmes during the ongoing Mahotsav.

He said, "Keeping in view the contribution of tribal communities in attaining Freedom, the country has also celebrated the 'Janajati Gaurav Saptah'." He added that an interesting programme was held in Delhi recently called ‘Azadi Ki Kahani - Bachchon Ki Zubani,’ where children narrated stories connected with the Freedom Struggle.

India's Maharatna, ONGC too is celebrating the Amrit Mahotsav in a slightly different manner. Modi pointed out that ONGC is organizing study tours to oil fields for students.

The Prime Minister also mentioned how in Andaman and Nicobar Islands, people from tribal communities such as Jarwa and Onge vibrantly displayed their culture.
He noted how miniature writer Ram Kumar Joshi from Una in Himachal Pradesh has drawn sketches of Netaji Subhash Chandra Bose and former Prime Minister Lal Bahadur Shastri on postage stamps.

The Prime Minister also pointed out that Australia shares a bond with Jhansi, Bundelkhand. When the Queen of Jhansi, Rani Lakshmibai was fighting a legal battle against the East India Company, her lawyer was originally a resident of Australia named John Lang, he noted.

The Prime Minister said Navy Day and Armed Forces Flag Day are celebrated in December and on December 16, the country will also celebrate the golden jubilee of the 1971 War.

"On all these occasions, I remember the country's Armed Forces... I remember our brave hearts, especially the brave mothers, who gave birth to such bravehearts," he said.

He said the death anniversary of Baba Saheb Ambedkar, who devoted his entire life in rendering his duties for the country and society, will be observed on December 6.
"We the countrymen should never forget the basic spirit of our Constitution, our Constitution expects all of us to discharge our duties - so let us also take a pledge that in the Amrit Mahotsav, we will try to fulfill our duties with full devotion. This shall be our true tribute to Baba Saheb," he added.