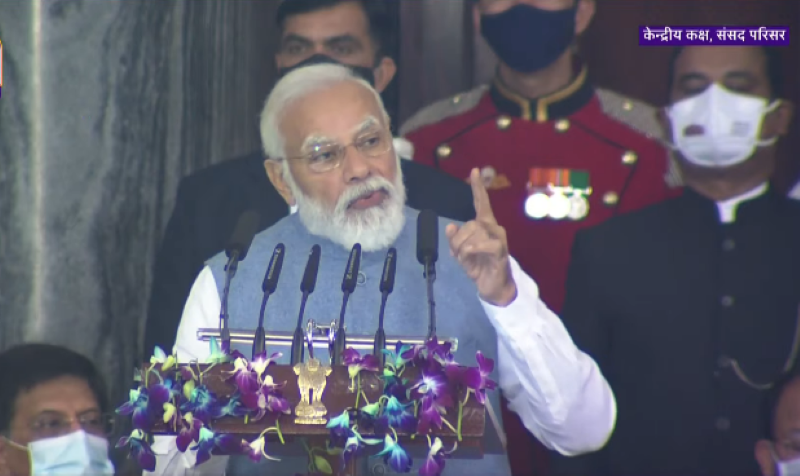 New Delhi/UNI: Prime Minister Narendra Modi on Friday launched a scathing attack on the Congress, Samajwadi Party, Trinamool Congress and others saying, "dynastic parties are a cause of concern for a healthy democracy to continue" as all the rival parties boycotted the Constitution Day celebrations in Parliament.

"If a party is run by one family generation after generation, that’s not right for a healthy democracy," said Modi, addressing a gathering in the Central Hall of Parliament during the 72nd Constitution Day.

"How can a party which has lost all its democratic values.... protect democracy in the country?" Modi said in a veiled attack at the Congress , calling it a "Party for the family, party by the family… need I say more?"

In the Azadi ka #AmritMahotsav, it is necessary for us to move forward on the path of duty so that our rights are protected: PM @narendramodi #SamvidhanDivas @mpa_india pic.twitter.com/XTdzBOF3Ow

"Dynastic politics is a threat to democracy. These parties are only for the family, by the family...," he added, making a clear demarcation of what he is against when it comes to dynastic politics: "More than one person can come from a family to run the party on the basis of merit, but one family running a party for generations is a danger to democracy."

The Prime Minister also warned about the growing threats to Indian Democracy. He told the electorates across the country how "political parties without transparent constitutional democracy within" have been seeking their votes with false promises.

Modi lashes out at the opposition for skipping from the Constitution event. He said that the dynasty rule-parties should not be a part of the democratic set up as it is against the spirit and principles laid down in the Constitution.