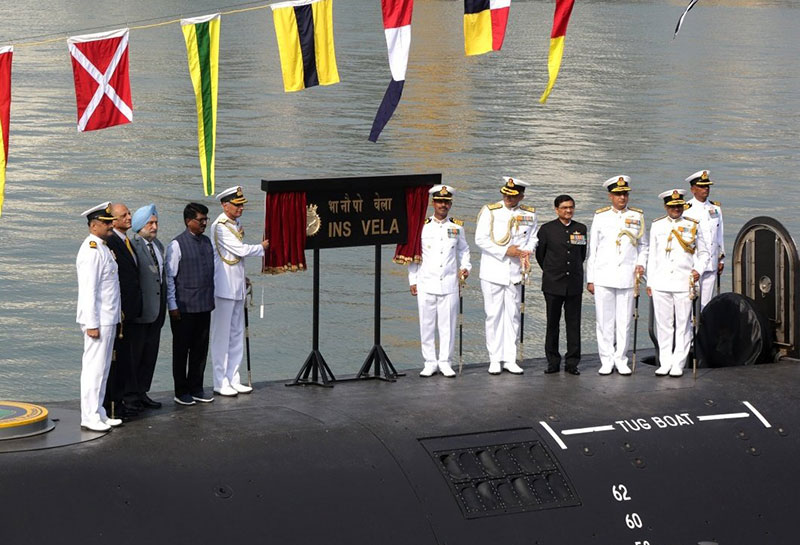 Mumbai/UNI: The Indian Navy commissioned the Scorpene-class submarine INS Vela on Thursday at the naval dockyard in Mumbai, in the presence of Chief of Naval staff Admiral Karambir Singh.

The Indian Navy has a total of six submarines in service under the Kalvari class submarine project-75. INS Vela is the fourth submarine in the category to be included in service.

It would form part of the Western Naval Command’s Submarine fleet and would be another potent part of its arsenal, the Indian Navy said.

Navy Chief Singh said the Indian Navy was transforming from being a 'Buyer's Navy' to a 'Builder's Navy'.

"Submarine building involves high levels of sophistication, with requirements of high degree of precision. The platform in front of us today showcases India’s notable strides in indigenous submarine construction, as also the journey from being a ‘Buyer’s Navy to a Builder’s Navy’.

"We witnessed a glimpse of this journey a few days back as well, when INS Visakhapatnam was commissioned," he said.

He said induction of the Foxtrot’s in 1967 heralded the birth of the Indian Navy’s submarine arm.

"A quantum leap of Navy’s operational capabilities was evident in the 1971 Indo-Pak War, where submarines played a crucial role in its war plans. In a similar vein, submarines of the Project 75 claim to transform India Navy's war fighting abilities in the underwater domain in the years to come," the Navy chief said.

He also said that while Project 75 has been an important step in enhancing the Navy’s capability, simultaneous progress is taking place under the Project 75-I, under the Strategic Partnership Model, which envisions achieving complete self-reliance in submarine construction and life cycle sustenance.

The Scorpene submarines are extremely potent platforms, with advanced stealth features. The boats are also equipped with both long range guided torpedoes as well as anti-ship missiles.

These submarines have a state of the art SONAR and sensor suite permitting outstanding operational capabilities. They also have an advanced Permanent Magnetic Synchronous motor (PERMASYN) as its propulsion motor.

INS Vela was built by MDL in collaboration with the Naval Group of France.

Earlier, the Navy had commissioned warship INS Visakhapatnam on Nov 21.