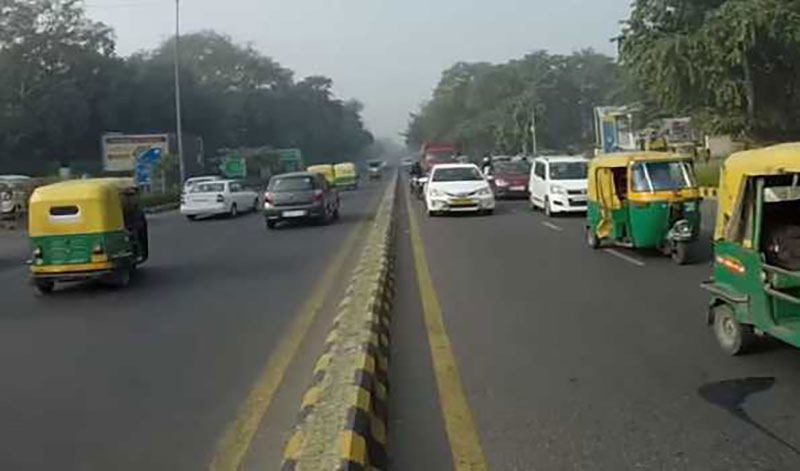 New Delhi/UNI: After recording worst pollution levels for past several weeks, Delhi on Tuesday got some respite as the Air Quality Index (AQI) level moved from "very poor" to “poor" category according to the System of Air Quality and Weather Forecasting and Research (SAFAR).

The air quality in the city was recorded at 266 in the morning.

"Due to strong winds at transport level blowing from northwest direction dispersing pollutants. So air quality is likely to improve to ‘poor’ or ‘lower end of very poor’ category in the next two days," said the agency.

It said, these winds are likely to continue on Wednesday that will lead to further improvement of air quality if there is no increase in fire count.

"The effective farm fire count has reduced to 909 and its contribution to Delhi’s PM2.5 on Tuesday is 6 per cent," SAFAR said.

According to data from the Central Pollution Control Board the Air Quality Index, the air quality in neighbouring parts of Delhi were recorded in "poor to moderate" category - Faridabad (at 175), Ghaziabad (196), Gurugram (298) and Noida (288).

Meanwhile, the Delhi government on Monday lifted the ban on construction activities after the marginal improvement in the national capital’s air quality but schools will remain shut till further orders.

Delhi Environment Minister Gopal Rai said due to the improvement in the air quality, and considering the difficulties faced by the workers after the ban on the construction work, the ban has been lifted.

"Strict monitoring will continue by 585 teams, and immediate action will be taken against violators of the 14-point anti-dust pollution measures," he said.

Earlier, the Delhi government on Sunday extended the ban on the entry of trucks carrying non-essential commodities into the city and work from home for its employees until November 26.

In addition to this, the environment department, in its order issued on Sunday, advised private offices to let their employees work from home.

According to the India Meteorological Department (IMD), the sky will remain clear with the minimum and maximum temperature likely to hover around 10 and 27 degree respectively