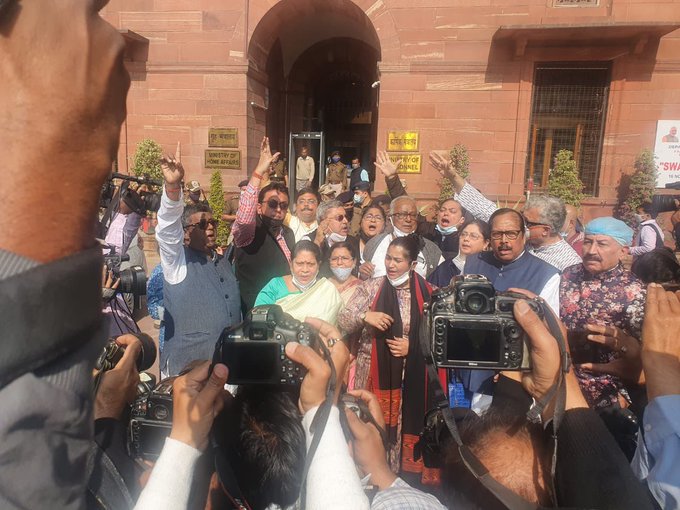 New Delhi/UNI: Union Home Minister Amit Shah on Monday assured a delegation of Trinamool Congress MPs that he will take cognizance of the alleged incidents of violence in Tripura.

A delegation of Trinamool MPs on Monday met Shah on the issue of political violence in Tripura and the arrest of its youth wing chief Saayoni Ghosh ahead of civic body polls in the state.

The delegation also submitted a memorandum to the union home minister in New Delhi and requested him to take cognizance of the matter.

"We explained to the Home Minister in detail how our leaders and workers are being attacked and arrested due to political vendetta during corporation elections in Tripura,” Saugata Roy, TMC MP, told reporters after meeting the home minister.

“We want the Home Minister to listen to us. Both Mr. Shah and Mr. Modi should answer for the violence in Tripura," Roy said.

He said, "We have also asked the Home Minister to immediately stop violence in the state and the police must stop filing false cases against TMC workers."

“Home Minister assured us that he will take cognizance of the matter and he also spoke to Tripura CM over the phone yesterday and will seek a report from the state," Roy informed.

Earlier on Monday, a total of 16 TMC MPs, including Derek O'Brien, Sukhendu Sekhar Roy, Santanu Sen, and Mala Roy, held a protest outside the Ministry of Home Affairs (MHA).

The party alleged that Saayoni Ghosh was attacked by BJP goons on Sunday, when she was taken to a police station in Agartala for questioning in a hit-and-run case.

“The people in the state are being attacked. Every time I come here they cancel my events, this time, too they have cancelled my rally” he said.

Meanwhile, the Tripura Police said neither the BJP nor the TMC will be allowed to hold rallies or roadshows in Agartala in view of the 'escalating tension' in the city.

Numerous clashes between both BJP and TMC workers have been reported over the past month ahead of the civic polls in Tripura.

The civic body polls in the BJP-ruled state are to be held on Nov 25.

Today, 17 Hon'ble MPs have submitted a memorandum regarding the brutality that our candidates, leaders, workers as well as supporters faced in Tripura. The situation is grave and worrisome.

We hope that JUSTICE will be served.