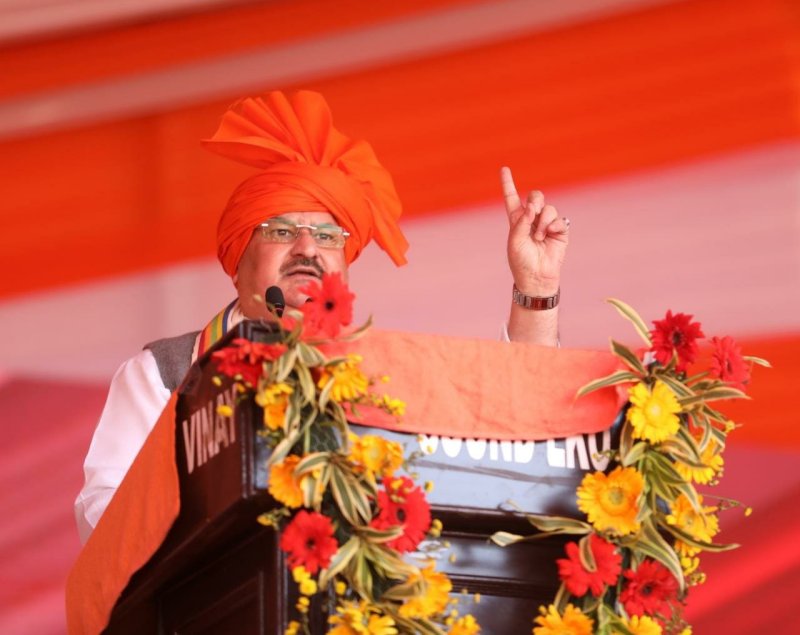 Only in BJP an ordinary worker can become party president: JP Nadda

Gorakhpur/UNI: Bharatiya Janata Party  President J P Nadda said every party worker should be proud that this is the party where an ordinary worker becomes the president of the party.

"I can claim that the booth workers sitting here can become the state president tomorrow. We believe in democracy, but the opposition parties believe only in the family, not on democracy. Only in BJP, an ordinary worker runs the party, nationalism is paramount for us but for them nothing is ahead of dynasty," Nadda said while addressing the booth level presidents here on Monday.

The BJP President said that is the reason when elections come, the party remembers Mahatma Gandhi and Sardar Patel while opposition parties start remembering Pakistan and Jinnah.

He said that when the PM  was saying that everyone should get the vaccine, some people were saying that this is Modi ji's vaccine and is BJP's vaccine.

"Now answer on whose vaccine you are roaming around. After a few days, the red cap is also going to be saffron. Many people become farmer leaders, but if anyone has done anything for the farmers, then only Modi ji has done it. Before 2014, there used to be a budget of Rs 20,000 crores, but today under the leadership of Modi, the budget of agriculture is Rs 1.23 lakh crore," said he.

The BJP President said that Uttar Pradesh has now changed fully in the Yogi Adityanath regime.

He said that during the freedom movement of the country in 1857, Shaheed Bandhu Singh had given his martyrdom on this land and many revolutionaries from time to time carried forward this campaign.

"This is the land where Pandit Ram Prasad Bismil had given his martyrdom and sacrificed himself for the independence of India," CM said.

He said that you will see that all the problems are being resolved one by one. "This is the same region where mafia and criminals used to dominate but today the goons have forgotten hooliganism, the mafia have left the state," said he.

Chief Minister Yogi Adityanath said that on the one side there is PM Modi to protect the pride and glory of India and to establish India as a capable and powerful nation in the world, while on the other hand, there are people thinking of Jinnah and snatching the rights of the people.

After his programme, Nadda left for Lucknow for his night stay. On Tuesday, the BJP president will inaugurate a party office in Kanpur and attend a booth presidents convention.