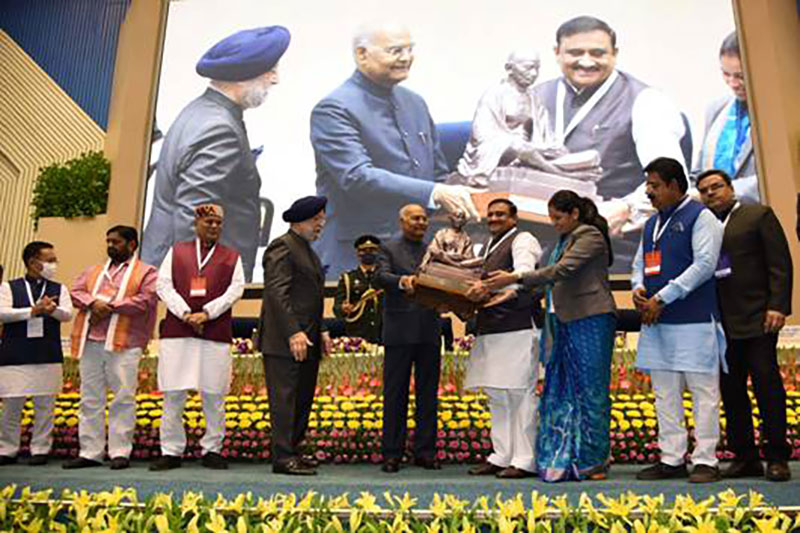 For the fifth consecutive year, Indore was awarded the title of India’s Cleanest City under Swachh Survekshan, while Surat and Vijayawada bagged the second and third spots respectively in the ‘more than 1 lakh population’ category.

In the population category of ‘less than 1 lakh’, Vita, Lonavala and Sasvad, all from Maharashtra, bagged the first, second and third positions respectively.

In the category of ‘Fastest Mover’, Hoshangabad (Madhya Pradesh) emerged as the ‘Fastest Mover City’ (in the ‘more than 1 lakh population’ category) with a jump of 274 ranks from 361st position in the 2020 rankings to the 87th position this year, thus securing a place among the top 100 cities.

President Ram Nath Kovind on Saturdayfelicitated the awardees of the cleanest cities of India at the ‘Swachh Amrit Mahotsav’ hosted as part of Swachh Bharat Mission-Urban 2.0 by Ministry of Housing & Urban Affairs (MoHUA) at Vigyan Bhavan, New Delhi.

The award ceremony, organized to recognize the good work done for Swachhata by towns/ cities, States and Union Territories under various initiatives of the Swachh Bharat Mission (Urban), viz. Swachh Survekshan 2021, Safaimitra Suraksha Challenge, and certifications for Garbage Free Star rating for cities – saw more than 300 awards under various categories being given away through the day.

Speaking at the event, the President said that this year's Swachh Survekshan Awards have special significance because we are celebrating 'Azadi Ka Amrit Mahotsav'.

He noted that Safai Mitras and sanitation workers have continuously rendered their services even during the COVID pandemic.

He said that the government is committed to ensure that the life of no sanitation worker is put at risk due to unsafe cleaning practices.

The President said that effective management of solid waste is essential to keep the cities clean.

He stressed that environment conservation has been an integral part of the traditional lifestyle of India.