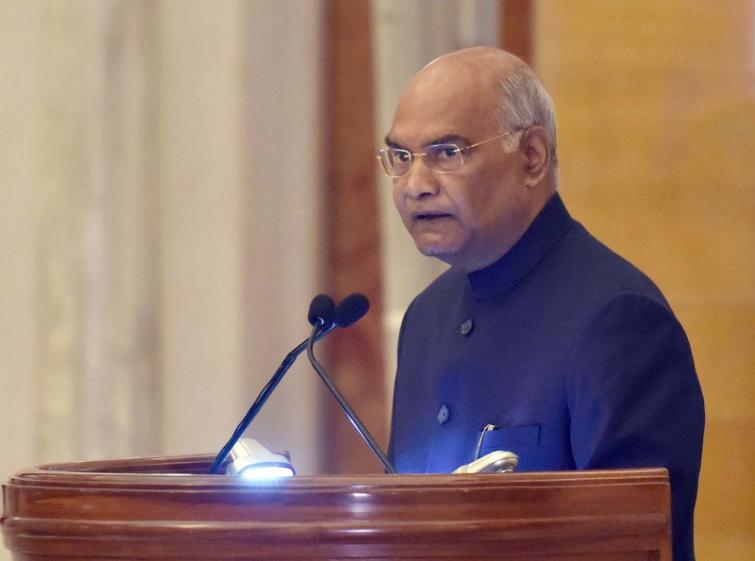 New Delhi: President Ram Nath Kovind, addressed the Swachh Amrit Mahotsav and presented the Swachh Survekshan Awards 2021, being organised by the Ministry of Housing and Urban Affairs, at a function held in New Delhi on Saturday.

Speaking on the occasion, the President said: "This year's Swachh Survekshan Awards have special significance because we are celebrating 'Azadi Ka Amrit Mahotsav'. Mahatma Gandhi used to say that “cleanliness is next to godliness”. According to him cleanliness should be the top priority."

The President said that this priority of Gandhiji has been carried forward by the Government of India as a mass movement through Swachh Bharat Mission.

He stated that our efforts to make the country completely neat and clean are a true tribute to our freedom fighters.

The President noted that Safai Mitras and sanitation workers have continuously rendered their services even during the COVID pandemic.

He said that the government is committed to ensure that life of no sanitation worker is put at risk due to unsafe cleaning practices.

He appreciated the ‘Safai Mitra Suraksha Challenge' initiative of the Ministry of Housing and Urban Affairs which has been started in 246 cities with the aim to promote mechanical cleaning of sewers and septic tanks.

He advised the Ministry of Housing and Urban Affairs to extend this mechanical cleaning facility in all the cities.

He said that manual scavenging is a shameful practice.

"Eradication of this practice is not only the responsibility of the government but also of the society and citizens," the President said.

The President said that effective management of solid waste is essential to keep the cities clean. On October 1, 2021, Prime Minister has launched 'Swachh Bharat Mission - Urban 2.0' with the goal of making all cities 'waste-free' by 2026.

It is obvious that a garbage-free city requires that houses, streets and localities remain garbage-free.

He emphasised that the responsibility of the success of this campaign lies with the government as well as all the citizens.

"We have to ensure that everyone segregates wet and dry waste at home," he said.

The President said that environment conservation has been an integral part of the traditional lifestyle of India.

Today, the whole world is emphasising on environment protection in which focus is on to reduce, reuse and recycle the resources, he said.

He noted that good examples are coming out of the idea of 'Waste to Wealth' and many start-ups are active in these areas.

He said that appropriate schemes could be developed to encourage entrepreneurship and investment in these areas.