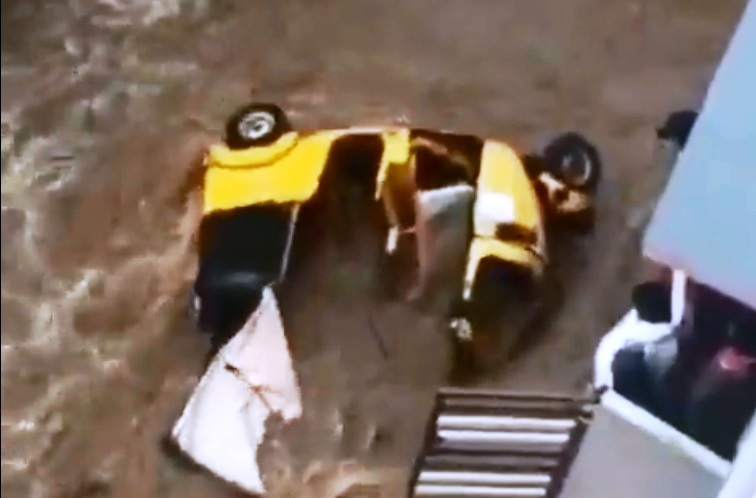 Kadapa/UNI: Heavy rains and the floods under the influence of low pressure have claimed 12 lives in YSR Kadapa district of Andhra Pradesh and some others were missing.

Police said that three APSRTC buses were struck in the flood water at Nandaluru, Mandavalli and Aakapadu villages in Rajampet division of the district.

The Cheyyuru reservoir breach resulted in the three buses submerged in the flood water.

Some of the passengers in one of the buses were found washed away in the swirling flood water.

The officials were trying to establish whether they were the bus passengers or belonged to a nearby village.

However, the fire brigade personnel rescued the passengers of the other two buses.

The death toll is likely to increase as some others are still missing”, police said. YSR Kadapadistrict is the worst affected by the heavy rains and floods.

Chief Minister Reddy expressed deep condolences to the families of the people lost their lives due to heavy rains and directed the officials to provide them a compensation of Rs 5 lakh on war footing.

He said the state government would come to the rescue of the people hit by heavy rains and assured them all help.

The Chief Minister said he had directed the district collectors of Nellore, Chittoor and YSR districts to be liberal and compassionate towards the needs of the people.

He said teams were formed to access the damage to crops and added that crop enumeration will be done once the rains recede. “Seeds will be provided at 80% discount to ground nut farmers whose crops were damages to heavy rains in Chittoor, Anantapur and YSR districts and at 80% discount to paddy farmers in Nellore district," the chief minister said.

The Chief Minister also assured that the crop loss of rabi season would be given in the same season before onset of kharif.

Earlier, the Chief Minister held a review meeting with the district collectors of Nellore, Chittoor and YSR districts and alerted the officials to be vigilant.