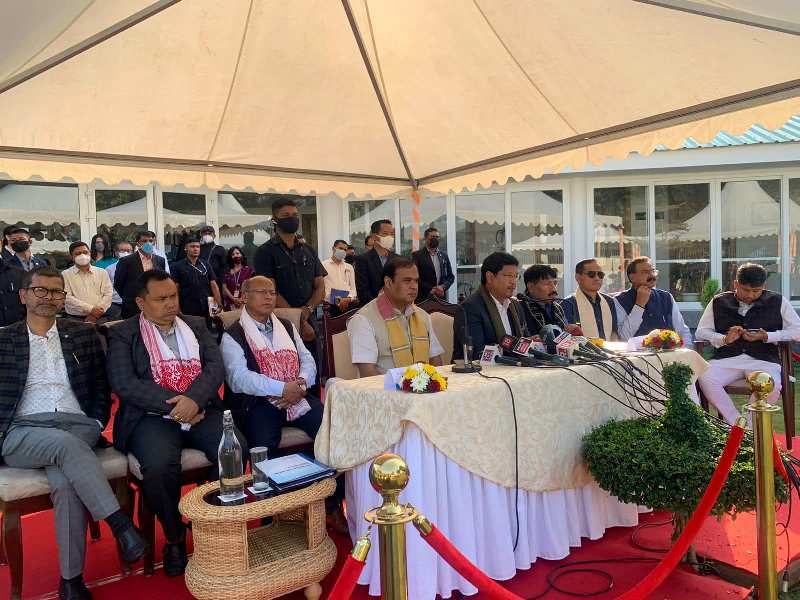 Assam, Meghalaya to take up measures to settle inter-state border dispute in six sites by end of this year

Guwahati/IBNS: The governments of Assam and Meghalaya on Tuesday announced that they will take necessary steps to settle inter-state border disputes in six areas by the end of this year.

Addressing a joint press conference held in Guwahati, the Chief Ministers of both states said that the regional committees which were set by the both governments to find out the solutions, will submit their reports  to their respective Chief Ministers by Nov 30.

Assam Chief Minister Dr Himanta Biswa Sarma said that, probably the entire process will be completed by Dec 30 this year.

"The meetings of the committees are continuously going on. Today we have fixed that, all the regional committees will submit their reports to their respective Chief Minister by Nov 30. Once the report is on our table we meet again and we will see whether we have a meeting of minds or not. If we have a similar thinking then we will go back to our state again and will consult the stakeholders once again at the state level. Once that process is done we will be issuing a final statement on the six disputes. Probably we will be able to complete the entire process by Dec 30 this year if the present spirit continues,” he said.

The Chief Ministers of both states along with their cabinet colleagues on Tuesday visited the Langpih area and met the villagers.

“Today we have gone to Langpih to demonstrate the facts even in the more critical areas like Langpih, if we work together, we will be able to resolve those disputes. Today was to give assurance to the people of Meghalaya and Assam although we are taking up six disputes as of now, but in the next phase we are going to take up remaining disputes also either in phases or totality. Today’s visit to Langpih was extremely successful. I think for the first time the historical initiative has been taken,” Sarma said.

On the other hand, Meghalaya Chief Minister Conrad Sangma said that, by Nov 30, the respective regional committees will submit their reports to their Chief Minister and post that they will hold consultation with other stakeholders.

“After consultation, two governments will decide the final date to meet once again to give the final picture. We are trying to come to an understanding on this very important issue between the two states,” Conrad Sangma said.