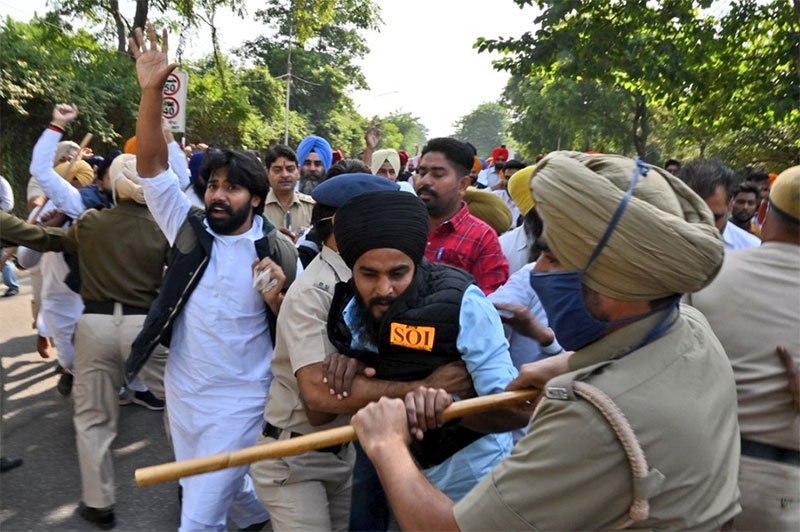 According to a party statement here, the workers faced a brutal lathi charge near the CM’s residence, in which more than dozen of them were injured, including some who suffered serious injuries.

Badal condemned the lathi charge and said it was part of a conspiracy to prevent people from raising their voice against the corrupt Congress government which was indulging in open loot and plunder of State resources.

He demanded the false case be withdrawn immediately besides calling for a probe into the unprovoked attack on Akali workers.

Earlier, the SAD chief courted arrested along with senior party leaders and workers.

He also announced the party’s resolve to continue to protest peacefully until the grievances of the farmers as well as the common man were not resolved.

He said the voice of people could not be throttled with sticks as Punjabis had never tolerated tyranny and would give a befitting response to the gang of ‘lutere’ ruling the State at present.

In the afternoon, the Akali workers held a march from the MLA flats to the CM’s residence and even broke police barriers to reach the chief minister’s residence.

Holding placards and raising slogans of “narma da muawafza jaari karo” and ‘petrol diesel sasta karo, annadaata te reham karo”, the Akali workers also demanded registration of a case against the Gandhi family in the 1984 genocide case besides demanding an end to the protection being given to the massacre perpetrators including Jagdish Tytler.

Speaking on the occasion, Badal asked the Chief Minister to stop photo-ops and start performing by delivering on the promises made to the people. He said instead of doing this Charanjit Channi was extending patronage to the sand and liquor mafia who were ruling the roost.

Badal also demanded the state government give immediate relief to the common man and farmers by reducing State VAT on petrol and diesel by Rs 10 per litre each.

The SAD chief also asked Chief Minister Charanjit Channi and Pradesh Congress President Navjot Sidhu as to why they had not objected to the award of a top post to 1984 carnage perpetrator Jagdish Tytler. He said there were accusations against Channi that he had agreed to the move during a meeting with Congress President Sonia Gandhi.

He also asked Navjot Sidhu to demand the removal of Jagdish Tytler if he was really concerned about the sentiments of the Sikh Panth and Punjabis. If neither Channi nor Sidhu protest Tytler's appointment to Delhi Congress Committee, they would prove to be the biggest betrayers of the Sikh ‘panth’, he added.

Badal also demanded that Congress should support a resolution calling for registration of case against the Gandhi family in the 1984 genocide in the coming special session of Vidhan Sabha. He said similarly, the resolution should also demand immediate arrest of Tytler for systematically targeting Sikhs and their properties in November, 1984.