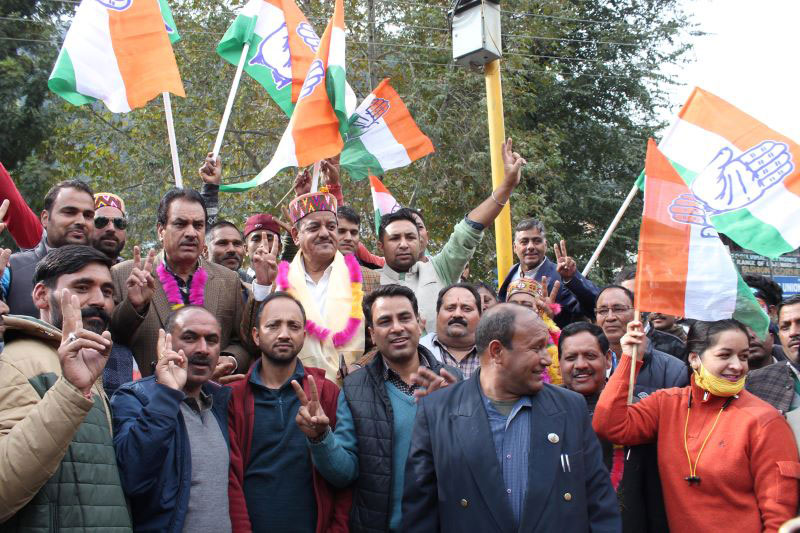 Shimla/UNI: Congress looked all set to sweep the by-elections held on four seats in Himachal Pradesh, as the grand old party won the Jubbal Kotkhai Assembly seat by 6,104 votes, while it was leading on two assembly and one Lok Sabha seat, as final round of counting was on.

Congress candidate Pratibha Singh established a lead of above 8,000 votes for the Mandi Parliamentary segment against rival BJP candidate Brigadier Khushal Thakur in a neck-to-neck fight.

In Fatehpur Assembly, the Congress candidate was leading by 4597 votes against rival BJP nominee Baldev Thakur in the triangular contest. BJP rebel and former Minister and MLA Rahan Sushant got 10626 votes and saved his deposit.

Congress seems to be retaining Arki and Fatehpur Assembly seat and likely to wrest the Mandi Parliamentary and Jubbal Kotkhai Assembly constituency.

Mandi is the second biggest Parliamentary constituency in the country comprising 17 Assembly Constituencies and Congress is about to wrest the seat from ruling BJP.

The BJP won the 2019 general election from Mandi Lok Sabha by margin of more than four lakh votes .

Seat fell vacant due to the mysterious death of BJP Former MP Ramswaroop Sharma in Month of March this year.

Mandi Parametery is home district of Chief minister Jai Ram Thakur who was the star campaigner of the party in the bye election.

It is considered a semi finals for next year's Assembly general election and the mandate given by the people a year ahead is major trouble to the ruling state and central government.

The BJP has won all the four parliamentary seats in the 2019 General Election and established a lead in all 68 Assembly segments.