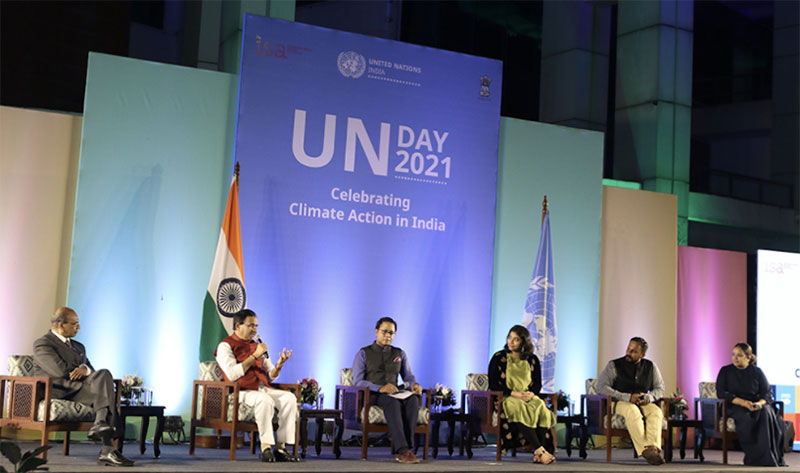 New Delhi: The UN in India commemorated the 76th year of its founding with a celebration of climate action in India, highlighting its enduring partnership with the Government and the people of India.

The commemoration on October 24 also showcased the incremental role young people are playing in India achieving its climate ambition.

Speaking at the in-person commemoration, Union Minister of State for New and Renewable Energy, Bhagwanth Khuba, said, “Over the years, India and the UN have cooperated closely on our shared objectives of world peace and the guarantee of sustainable development. The Decade of Action for the Sustainable Development Goals is upon us. And unprecedented actions are needed to limit global warming to 1.5 degrees. I believe the UN Day theme of climate action is timely.”

The first-ever solar-powered UN Day, organized in partnership with the International Solar Alliance, highlighted India’s pioneering leadership on climate action. Surya Bhavan – which hosts the ISA secretariat – was illuminated in the colours of the Sustainable Development Goals to underscore
India’s ambition on renewables and commitment to the Agenda 2030.

“India has already scripted history by halving poverty and by rapidly bringing lighted homes, safe sanitation, and clean fuel to millions. India has made tremendous gains in accelerating progress towards the SDGs. Now, India is about to script history on climate action. And we look forward to its contribution,” said Dr Yasmin Ali Haque, on behalf of the UN in India.

India’s partnership with the UN spans all seven decades of its life. India signed the founding Charter of the United Nations in San Francisco on 26 June 1945.

The Charter came into force on 24 October of the same year, an anniversary commemorated worldwide as UN Day.

“The values that have powered the UN Charter for the last 76 years — peace, development, human rights, and opportunity for all — have no expiry date. As we mark UN Day, let’s unite behind these ideals, and live up to the full promise, potential and hope of the United Nations,” said UN Secretary-General Antonio Guterres in his video message on UN Day.

India has taken a global leadership position in combating climate change with its strategic and timely climate policies.

Currently, India is on track to meet its climate goals. India stands fifth in overall
renewable energy installed capacity, which stands at more than 141 gigawatts, about 37 percent of the country’s total capacity.

Dr Ajay Mathur, Director-General, International Solar Alliance, said, “Solar already provides the cheapest electricity in many parts of the world, but only when the sun is shining.

"At the upcoming CoP, we need to create an international collaboration that enables cost-effective round-the-clock solar electricity. And collaboration to enable the ideas of young people to take root into concrete products
and processes.”

The UN Day event also marks the culmination of the UN in India’s #WeTheChangeNow campaign, which showcases innovative and equitable climate solutions pioneered by young Indians.

On the occasion, the UN in India organized a dialogue between some of India’s climate trailblazers - Garvita Gulhati, Nidhi Pant and Sanju Soman and policymakers – Minister Khuba and Dr Mathur - on the role of young people in advancing climate action in India.