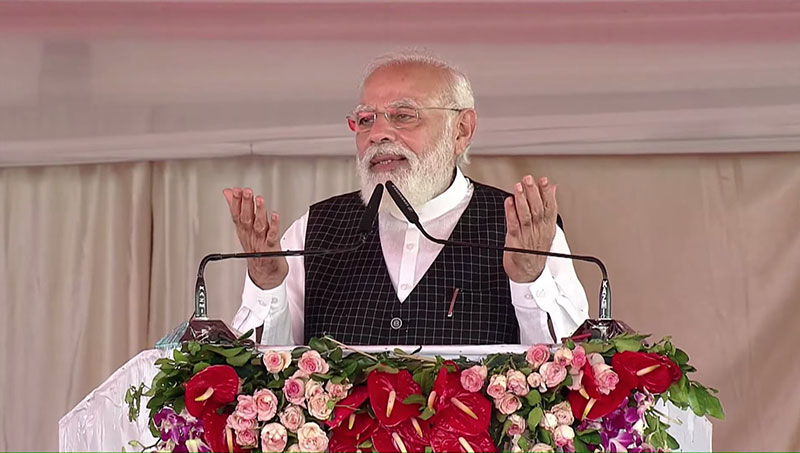 Modi in UP
Image Credit: Twitter/BJP

All nine will be well-equipped with 300 or more beds and admission will also start for 100 MBBS seats in each college through NEET from this session.

These nine medical colleges have been set up for a cost of Rs 2,329 crore.

Around 900 additional MBBS seats would be available in the state from here on.

With this, Uttar Pradesh became the only state in the country to inaugurate nine medical colleges simultaneously.

It will boost the health infrastructure in a big way as this endeavour will augment more than 3,000 hospital beds.

The boost to medical infrastructure is in line with the resolve of Chief Minister Yogi Adityanath to establish at least one medical college in each of the 75 districts.

Before 2017, there were a dozen medical colleges in the state.

There are 14 new medical colleges in the pipeline to be set up in Amethi, Auraiya, Bijnor, Bulandshahr, Chandauli, Gonda, Kanpur Dehat, Kaushambi, Kushinagar, Lakhimpur Kheri, Lalitpur, Pilibhit, Sonbhadra and Sultanpur districts by 2022-23.

Apart from existing 30 private medical colleges in the state, there are four central medical institutions -- two AIIMS, one each at Rae Bareli and Gorakhpur, BHU and one Medical College in AMU.

The Yogi government has also cleared the policy and floated the tender to establish medical colleges under PPP model in the remaining 16 districts thus paving the way to hit a century of medical colleges in the state.

On Oct 20, Modi laid the foundation stone of a medical college in Kushinagar.