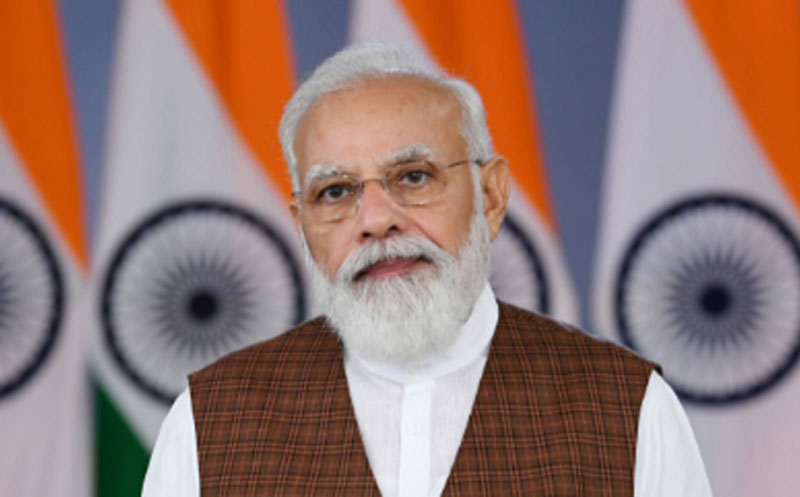 The Prime Minister while interacting with Isha Savant, Under Secretary to Government of Goa asked her experience of working as a Swayampoorna Mitra.

She informed that beneficiaries are getting services and solutions at their doorstep. There is ease as there are single-point service windows.

When the Prime Minister asked about use of technology, she informed that technology was used as data was collected in a collaborative manner. This enabled the mapping of needed facilities, she said.

Regarding women empowerment, the Prime Minister was informed that through training and self help group mechanism, women were provided equipment and support with regard to social media marketing and branding.

Atal Incubation groups were also used. The Prime Minister recalled his Chief Minister days and talked about training members of women self help groups for services like serving food, catering etc via training and creating an enabling environment.

Constancio Miranda, ex headmaster and a sarpanch informed the Prime MInister that the Swayampurna campaign helped new activities in achieving the goals of AatmaNirbharta in various fields.

They identified need-based state and central schemes and went on working on them in a coordinated manner.

The Prime Minister talked to Kundan Falari who informed that he and the local administration are geared to reach the last person in the community.

He narrated his experience of popularizing the SVANIDHI scheme in his area.

The Prime Minister informed that as part of 60 years' of Goa Liberation, a special grant of 50 lakh per Panchayat and 1 crore for every Municipality is being provided by the central government to Goa.

The Prime Minister talked about the government efforts of financial inclusion and said that people should be encouraged to avail government schemes.

Luis Cardozo, an entrepreneur in fisheries, narrated his story of getting benefits from government schemes and using insulated vehicles.

The Prime Minister talked of Kisan Credit card, NAVIC app, finances for boats, the schemes that are helping the fishermen community.

The Prime Minister conveyed his desire for expansion of processed products instead of raw produce for more profit for fishermen and farmers.

Ruki Ahmed Rajasab informed about the measures taken for divyang jan under Swayampurna.

The Prime Minister said that the government is working for the dignity and ease of the Divyang Jan.

He remembered efforts like standardization of the facilities and success of the Para Athletes in the recent paralympics.

Talking to Nishita Namdev Gawas, head of Self Help Group, the Prime Minister asked about the products of the group and the ways they do the marketing of their products.

The Prime Minister emphasized that the government is undertaking schemes like Ujjwala, Swachch Bharat, PM Awas, Jan Dhan to enhance dignity and confidence of the women.

"Women are bringing laureles in every field be it the Armed forces sports field," said the Prime Minister.

With Durgesh M Shirodkar the Prime Minister discussed his group's dairy activities. He said that his group took advantage of the Kisan Credit Card.

They also made other farmers and dairy entrepreneurs aware about the facility. The Prime Minister appreciated Shri Shirodkar’s effort to popularize the Kisan Credit Card scheme.

The Prime Minister said that the government is committed to make an ecosystem from seed to market to help increase their income.

But today he added that Goa also signifies a new model of development, reflection of collective efforts and solidarity for development from Panchayat to Administration.

The country set a target of providing electricity connection to every household. Goa has achieved the goal 100%.

In Har Ghar Jal Abhiyan – Goa has become the first state to achieve 100% implementation.  In the matter of giving free ration to the poor – Goa has achieved 100 %, the Prime Minister appreciated.

The Prime Minister said, for the convenience and dignity of women, Goa is successfully implementing the schemes of the Union government on the ground and is also expanding them.

He lauded the Government of Goa for doing a great job in providing facilities like toilets, Ujjwala gas connections or Jan Dhan bank accounts to women.

The Prime Minister remembered Late Manohar Parrikar who had taken Goa on the path of progress. He lauded the current Chief Minister and his team for sincerely taking the project of Goa’s growth forward and giving new heights to Goa.

Today Goa is moving ahead with renewed confidence. Double engine government is working with energy and determination for the growth of the state.

The result of this new team spirit of Team Goa is the resolve of Swayampurna Goa, Modi emphasized.

The Prime Minister said the infrastructure being developed in Goa will also help in increasing the income of farmers, livestock farmers and our fishermen.

He added that Goa's fund for modernization of rural infrastructure has been increased 5 fold this year as compared to earlier.

The Prime Minister said incentives are being given at every level from various ministries for modernization of fishermen's boats.

He added that the fishermen in Goa are getting a lot of help  under the Pradhan Mantri Matsya Sampada Yojana also.

About the vaccination campaign, the Prime Minister said that special incentives have been given to the tourism based states in the country, including Goa.

Goa has also benefited a lot from this. He lauded the Government of Goa for taking efforts day and night in administering the first dose of vaccine to all the eligible people.