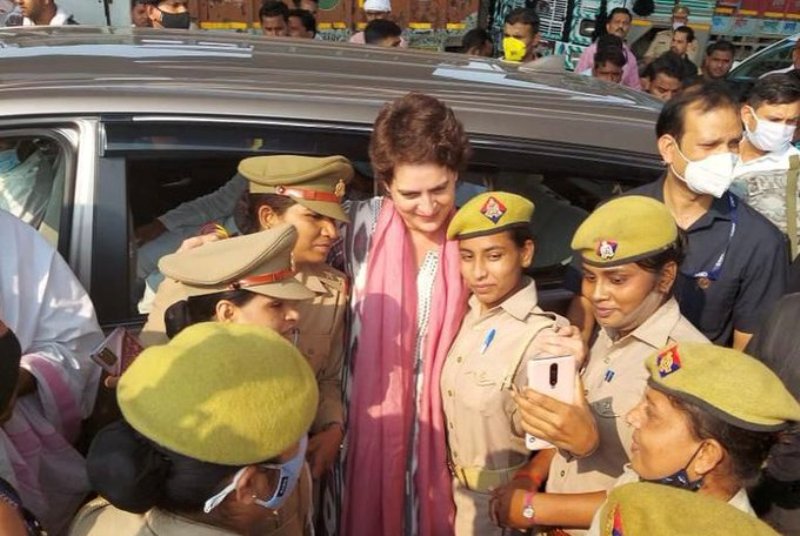 New Delhi/IBNS: Uttar Pradesh Chief Minister Yogi Adityanath is apparently upset with policewomen who posed for selfies with Priyanka Gandhi Vadra en route to meet the family of the man who died in police custody, the Congress leader on Wednesday tweeted urging that these hardworking cops should not be punished for this reason.

She was stopped on her way to Agra and briefly detained before being allowed to meet the family on Wednesday.

When she was stopped on the Lucknow-Agra Expressway, amidst all chaos, some police women took selfies with Priyanka.

The image was shared by the Congress and later Priyanka herself on Twitter.

"The news is coming that Yogi ji got so upset with this picture that he wants to take action against these women policemen. If it is a crime to take pictures with me, then I should also be punished for it, it does not suit the government to spoil the career of these hardworking and loyal policemen," she tweeted in Hindi.

In the picture, the Congress leader was seen smiling ear-to-ear as several female officers jostled to get the perfect shot.

Earlier in the day, UP Police said Arun Valmiki, accused of stealing money, died after his health deteriorated during interrogation.

UP Police informed that Priyanka was stopped as per an order issued by the Agra District Magistrate, which cited potential law and order issues and directed cops to stop political leaders from visiting the city.

Priyanka was detained earlier this month as she tried to visit the families of the farmers killed during the Lakhimpur Kheri violence in Uttar Pradesh.

Her brother, party MP Rahul Gandhi, was also stopped from visiting the families.