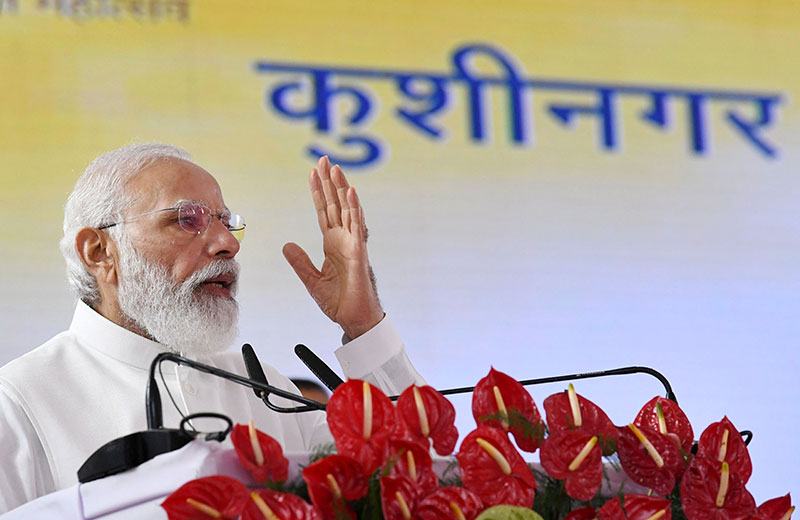 Kushinagar/UNI: Inaugurating the Kushinagar International Airport here in Uttar Pradesh, Prime Minister Narendra Modi Wednesday said the aviation sector will get the much needed shot in the arm due to the Centre's recent decisions that in turn will boost tourism, job opportunity and trade.

A Sri Lankan delegation along with a group of union ministers, Uttar Pradesh Governor Anandiben Patel and Chief Minister Yogi Adityanath besides state ministers were present on the occasion.

The Prime Minister said very soon 1,000 new aircraft would be added to the national fleet.

Modi said the Kushinagar International Airport is the result of decades of hopes and expectations.

"My happiness is two-fold today. Curious about the spiritual journey, I've a sense of satisfaction and as a representative of the Purvanchal area, it is time for the fulfillment of a commitment," he said.

"Recently the PM Gatishakti- National Master Plan has also been launched. This will not only improve the governance, it will also ensure that whether it is road, rail, or plane, they support each other, increase each other's capacity.

"Besides, the country has taken a big step related to Air India, so that the country's aviation sector should run professionally, and convenience and safety should be given priority," he said.

He added that the effort is to have a network of more than 200 airports, helipads and aerodromes in the nation in the next 3-4 years.

The Prime Minister said these steps will infuse new energy into the aviation sector as a major reform will include opening of defense airspace for civil use.

Modi said under the UDAAN scheme, more than 900 new routes have been approved in the last few years, out of which air service has started on more than 350 destinations.

He said more than 50 new airports or those which were not in service earlier have been made operational while eight new flying academies will start functioning soon.

Talking about the importance of Kushinagar, he said in order to develop the places associated with Lord Buddha, for better connectivity, special attention is being given for creation of facilities for the devotees.

"Kushinagar International Airport won't just be a mode of air connectivity. but the farmers, shopkeepers, workers, local industrialists will be benefited.

"It'll create an ecosystem of business while tourism will get maximum benefit and will generate employment," he added. He also said: "I have been informed that in the next few weeks, SpiceJet is starting a direct flight between Delhi and Kushinagar. This will help local passengers and the pilgrims."

"The development of Kushinagar is among the priorities of the UP government and the central government. India is at the center of Buddhism.

The Kushinagar International Airport is a tribute to Buddha. Witnessing the entire journey from the enlightenment of Lord Buddha to Mahaparinirvana, this region is directly connected to the world today," the Prime Minister said.

He said this is the ninth airport in Uttar Pradesh and the third international one in the state with 2 more international airports coming up in Jewar and Ayodhya.