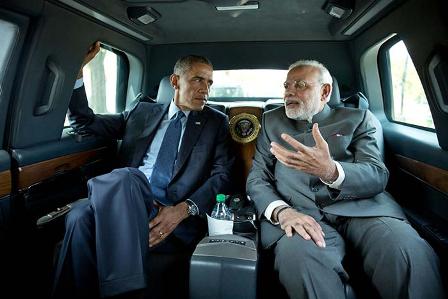 "I've made it clear that even as the United States works with Pakistan to meet the threat of terrorism, safe havens within Pakistan are not acceptable and that those behind the Mumbai terrorist attack must face justice," he has told India Today magazine in an interview.

Obama said as  US  President, he had  made sure that the "US has been unrelenting in our fight" against terrorist groups-a fight in which Indians and Americans were united. "Indians were tragically killed on 9/11, as were Americans on 26/11," he said.

The US President's comment is significant just ahead of his 3-day visit to India, beginning on January 25.

Obama said during his first visit to India during the Prime Ministership of Manmohan Singh, his first stop was the memorial at the Taj hotel to pay respects to the victims, meet with survivors and "send a strong message to the Indian people that we stand together in defence of our security and our way of life."

Emphasizing that the 'first obligation' of his Government was to ensure the security of its citizens, Obama said both India and the US can "continue deepening our robust counter terrorism cooperation."

Pointing at the macabre killings committed by terrorists at a Peshwar school that the world look at with disdain, Obama said like people around the world, Indians and Americans were horrified at the senseless slaughter. He said it was a "painful reminder that terrorists threaten us all."

Speaking on the armed campaign against terrorism that the US has launched, he said the US, working with allies and partners, had 'decimated the al Qaeda leadership in the tribal regions of Afghanistan and Pakistan and taken out leaders of Qaeda affiliates in Yemen and Somalia.

" Even though our combat mission is over in Afghanistan, we'll continue to help train and equip Afghan forces and engage in counter terrorism missions to prevent al Qaeda's return there. I would add that we are grateful for the generous assistance that India has provided over many years to help the Afghan people improve their lives," Obama said.