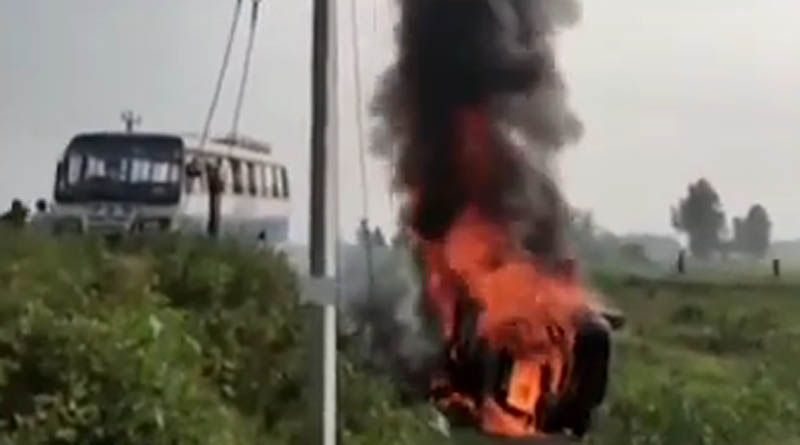 Lakhimpur Kheri/IBNS: The families of two of the farmers who were allegedly mowed down by the son of a Union minister at Tikunia in Uttar Pradesh’s Lakhimpur Kheri, have refused to cremate the bodies until they receive a copy of the post mortem and the FIR in the case.

According to an NDTV report, the family of 19-year-old Lovepreet Singh, who was allegedly hit by a vehicle on Sunday, said they won't cremate the bodies until they are provided the reports.

He visited the home of Nachhatar Singh, one of the two farmers, to discuss the matter with his family members.

Local farmers have been gathering at their homes in support of their stance.

The death of the farmers sparked violence and arson in the area in which four more people died, the report said.

"My son was crushed under a car... They have not taken any action against the person responsible. The administration is trying to cover up," said Lovepreet's father Satnam Singh.

Postmortem has been conducted on all the eight bodies which concluded that all the deaths were caused by injuries, shock, and brain haemorrhage.

A day after farmers reached an understanding with the government, and called a truce of sorts, agreeing to cremate the bodies, they have said the funerals will not take place till their demands were met.

Meanwhile, Union minister Ajay Mishra as well as his son Ashish Mishra, who has been accused of murder, have denied any role in the killings and said they were not at the spot on Sunday.

Both said they were attending a function with Deputy Chief Minister Keshav Maurya.

The Uttar Pradesh Police has blocked opposition leaders from visiting the Ground Zero of Sunday's violence.

Congress's Priyanka Gandhi Vadra was arrested while she was trying to reach Lakhimpur Kheri.

"So much for the government's claims that the families of the deceased farmers are satisfied with the action they have taken so far," she tweeted.

Her party colleague Deepender Singh Hooda tweeted, "Those who ruthlessly crush the farmers roam free and we are in police custody for 36 hours. The farmer families are mourning and there are celebrations in Lucknow."

Both Priyanka Vadhra and Hooda have are in custody and alleged that they are being held illegally.

Meanwhile, BJP leader Varun Gandhi also share the video of the incident and termed said it "will shake anybody's soul".

He was among the politicians, mostly opposition leaders, who posted the video on social media expressing their outrage over the alleged killings of the farmers.