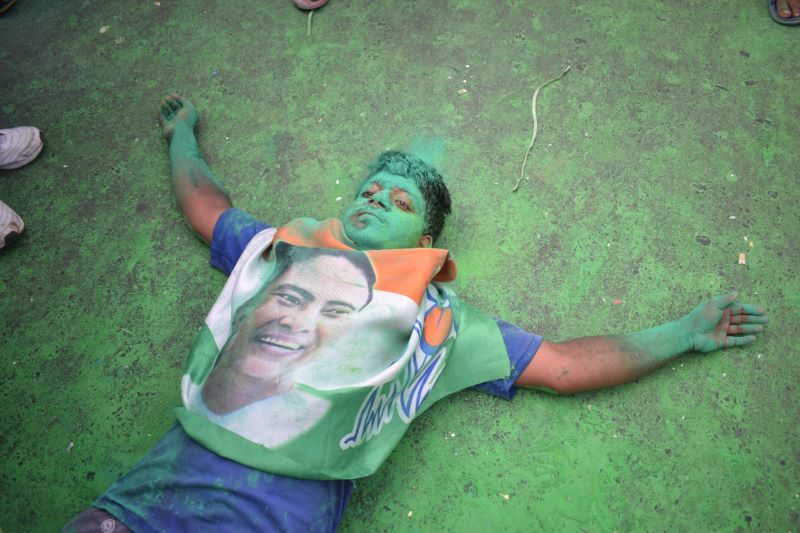 Banerjee, who was pitted against BJP's Priyanka Tibrewal, secured lead in all of 21 rounds of vote counting since Sunday morning to finally settle her victory with 58,832 votes.

In a bypoll where little over 57 percent people cast their votes, the TMC supremo was favoured by 84,709 voters in Bhabanipur, a cosmopolitan constituency which Banerjee refers to as 'Mini India'.

Tibrewal, an advocate by profession, performed poorly than BJP's star candidate Rudranil Ghosh, who was defeated by TMC veteran Shobhandeb Chattopadhyay by 28,000 odd votes four months ago when the assembly elections were held in the state. 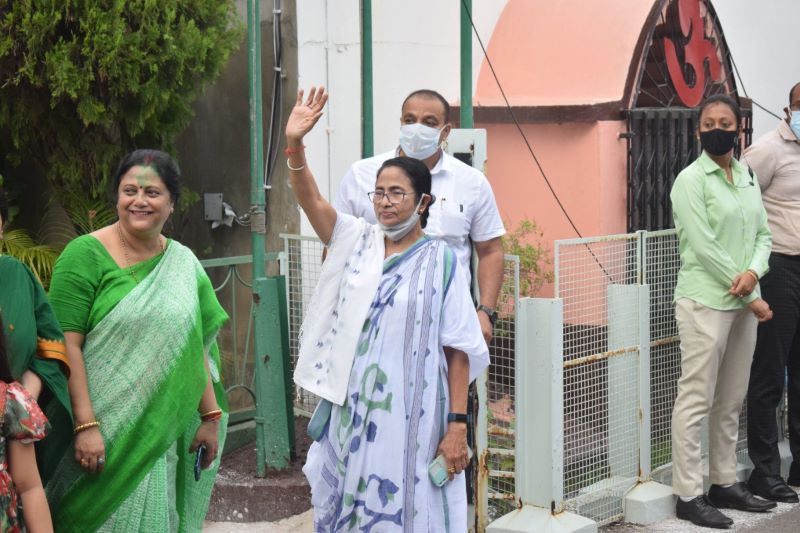 While Tibrewal could gather 26,320 votes, CPI-M candidate Shrijeeb Biswas performed no better than his party's terrible contemporary political adventures in the state by securing merely 4,201 votes.

Buoyant by her win which has once again triggered the debate whether Banerjee can become an anti-Modi face in 2024 national polls, the Chief Minister said, "People of the entire state were keeping track of this by-election... People have given a befitting reply."

Flanked by her nephew and TMC number two man Abhishek Banerjee outside her Kalighat residence, Banerjee referred to the Nandigram result saying, "The central government had hatched a conspiracy to defeat us in 2021 assembly elections. Despite that, we had won. I had personally fought an election but the matter is now subjudice. I won't comment." 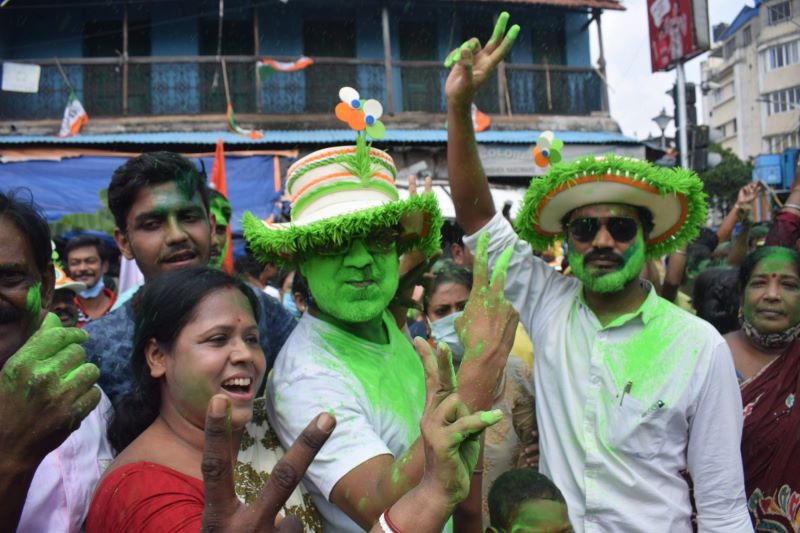 The TMC, which had survived the BJP scare in Mar-Apr elections, got lead in all eight Kolkata Municipal Corporation wards falling under the Bhabanipur constituency in this bypoll.

Though the BJP's organisational strength was no match to the TMC's oiled election machinery, steered by Banerjee's right-hand men, Tibrewal did all to give a fight to the 66-year-old feisty politician, who broke her own record of the winning margin registered in 2011 Bhabanipur bypoll.

Taking a dig at the TMC supremo even after accepting her poor defeat, Tibrewal said, "I had shown how the TMC has used fake voters on the polling day. But I accept my defeat unlike my opponent who goes to court challenging the result." 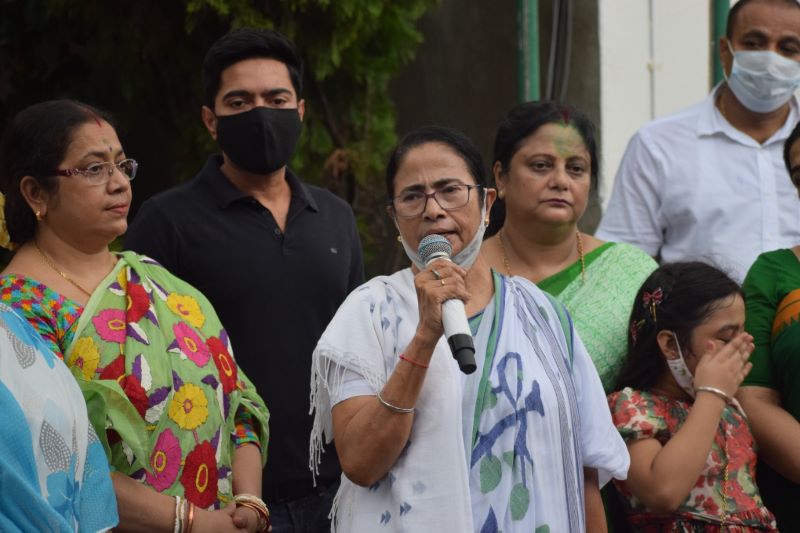 "I am overwhelmed by the affection of people and commitment of my party leadership and workers who put in many times more effort than myself. I express my deep sense of gratitude.. I rededicate with greater vigour to be in service of (to) people," later she tweeted.

I am overwhelmed by the affection of people and commitment of my party leadership and workers who put in many times more effort than myself.
I express my deep sense of gratitude..
I rededicate with greater vigour to be in service of people.

The bypoll in Bhabanipur was necessitated following the resignation of Chattopadhyay, who is now a West Bengal Minister.

Chattopadhyay resigned to pave the way for Banerjee to contest and get elected to the assembly after she was defeated by her lieutenant-turned BJP candidate, Suvendu Adhikari, in Nandigram.

Though the Nandigram result has been challenged by Banerjee in the court, she plunged into election again to remain in the Chief Minister's post. 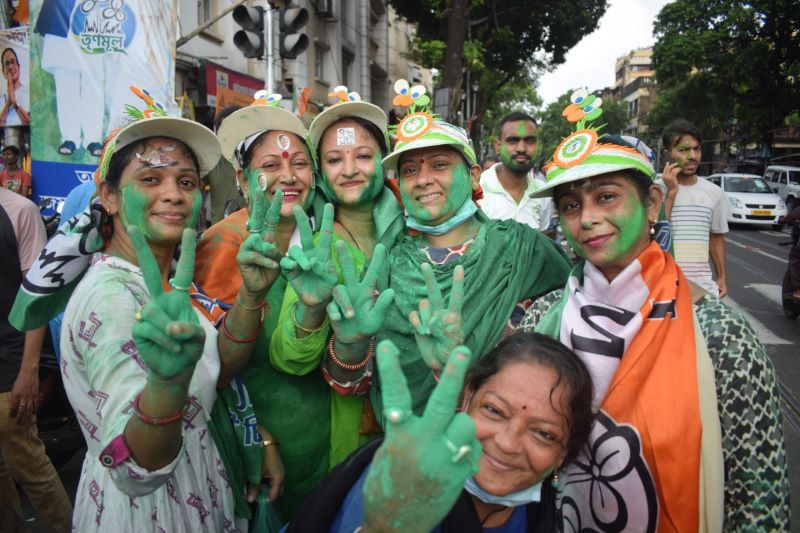 Not just her personal victory, Banerjee has more reasons to be happy Sunday as her TMC comfortably won two Murshidabad constituencies, Jangipur and Samserganj, which was once a belt dominated by the country's oldest party Congress.

With the twin victories in the two seats where elections were earlier postponed, the TMC's tally has now increased from 213 to 215 with four more by-elections due to be held in late October. 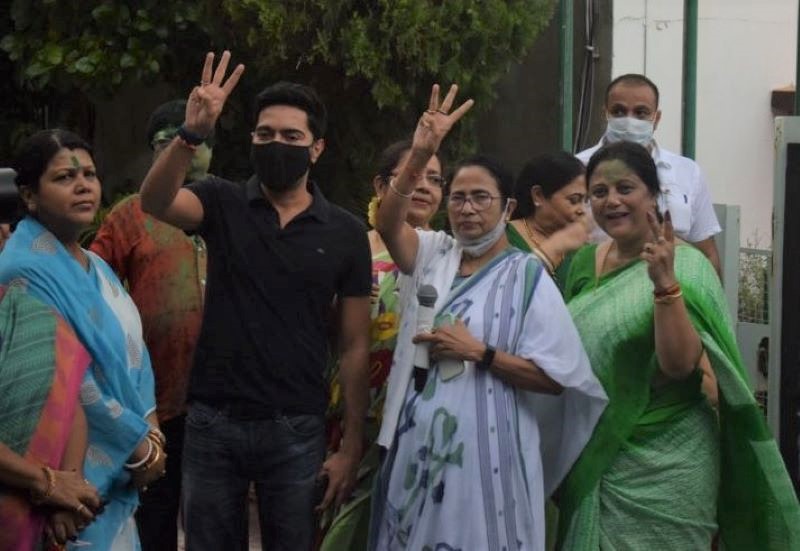 "I will not show victory signs but three fingers because my two colleagues have also won," Banerjee said.