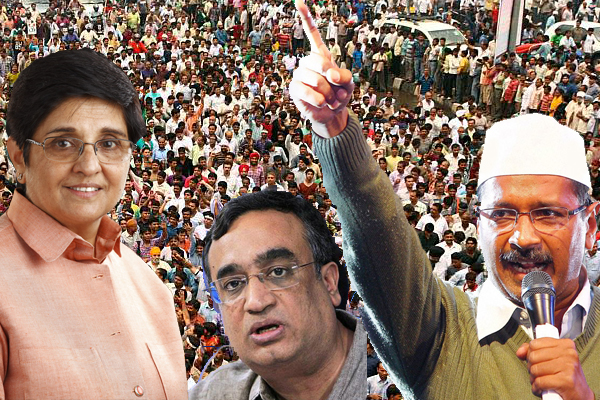 Congress's face for Delhi elections and party's campaign committee chief Ajay Maken  told reporters: "Kejriwal ji,if Kiran Bedi ji cant join us for debate so what? Let's u & I have a debate."

Kejriwal once again asked Bedi for a debate and asked why the former top cop was running away from it.

"Why kiran ji running away from debate? She is busy but surely she can take out 2 hrs from busy schedule. Ppl want 2 know her stand on issues," Kejriwal tweeted.

He said: "Kiran ji saying she wud debate after elections in assembly. She refuses to debate before elections saying she believes in delivery."

Kejriwal said: "Does it mean delivery before elections, debate after elections? We want debate before and delivery later."

Bedi had earlier accepted the challenge to participate in a debate but said  she will do it on the floors of the house.

Maken, Bedi and Kejriwal filed their nominations for the polls on Wednesday as the city is gearing up to witness a battle between the three main parties on Feb 7 when the people will elect a new assembly.


Bedi, a new entrant in politics, will be contesting from east Delhi constituency while former Chief Minister Kejriwal will be in fray for the New Delhi seat. Ajay Maken filed his nomination from Sadar Bazar seat.

Accusing media of being obsessed with Bedi, Kejriwal said it was focusing more on the BJP candidate.

He urged people to vote for his party and bring back the AAP in power in the national capital.

Kejriwal had earlier said his "biggest challenge is corruption and rising prices in Delhi".

Bedi promised Delhites to give a clean administration and involve the common people in development work.

Congress leader Kiran Walia, who will be contesting against Kejriwal from the New Delhi seat also filed her nomination  on the same day.

The Delhi Assembly election is scheduled for February 7.