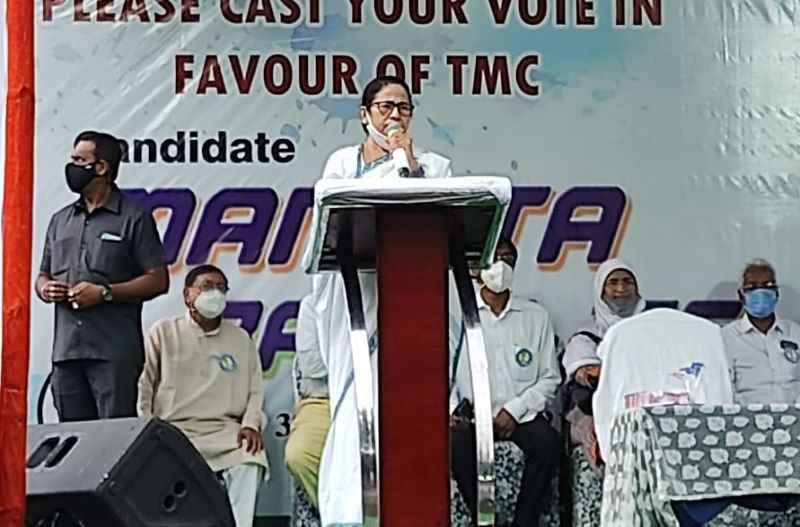 Kolkata/IBNS: West Bengal Chief Minister Mamata Banerjee Wednesday said she won't let the Bharatiya Janata Party (BJP) to turn India into a Taliban state, in an unsparing attack on the saffron camp while campaigning for her byelection in Bhabanipur constituency.

"We will not allow Modi ji, Amit Shah bhaiya ji to turn India into Taliban (state). India will remain India. We will not allow them to divide India and Bengal," said Banerjee at Muslim-dominated Ekbalpur area in Khidirpur.

The bypoll, which will be held on Sept 30, was necessitated following the resignation of West Bengal Minister and TMC leader Sovandeb Chattopadhyay.

Banerjee Wednesday said she was destined to fight from Bhabanipur though she had left the seat for Nandigram battle in Mar-Apr elections.

"I fought from here in 2011, 2016 and also became an MP. In 2021, I was requested to fight from Nandigram. But now the case (related to the verdict) is pending in court. When the verdict will be declared, people will be shocked to know how I was defeated through conspiracy," she said.

"Fighting from Bhabanipur is a matter of destiny. Destiny wants me to become Chief Minister from Bhabanipur," the feisty 66-year-old politician, who is fighting the bypoll in her backyard, added.

Though the Congress has fielded no candidate for the bypoll, the BJP and Left have nominated lawyers Priyanka Tibrewal and Srijib Biswas respectively.

Banerjee Wednesday once again cautioned the voters over voting lethargy and asked all to cast their votes, giving no chance to the BJP.

"I request everyone to cast votes. Do not skip voting or else I will suffer. The TMC has a majority to run the government but I will have to win from a seat to become the Chief Minister or else someone else will have to be in the post. The battle is much bigger. Who will fight against NRC, CAA if not me?" the TMC supremo said.

Taking a dig at Banerjee's campaign, BJP IT Cell head Amit Malviya tweeted, "The tide in Bhabanipur is not exactly what Mamata Banerjee had expected. It seems she has sensed that the going is getting tougher for her as polling day draws closer. She has now been forced to come out and campaign. But the silence of the voters is where the real story lies."

The tide in Bhabanipur is not exactly what Mamata Banerjee had expected. It seems she has sensed that the going is getting tougher for her as polling day draws closer. She has now been forced to come out and campaign. But the silence of the voters is where the real story lies.