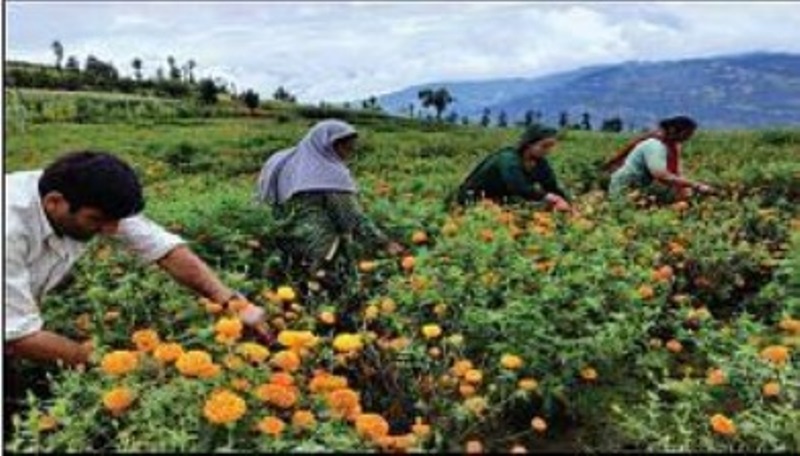 Bhadarwah/IBNS: After successful venturing into exotic lavender farming, which brought the Purple Revolution in Bhadarwah, now it is the turn of marigold which has been rapidly changing the fortunes of about 500 families.

The purple revolution had helped around 1,000 families during the Covid lockdown to earn their livelihood, sources claim.

500 families in Kellar Valley of Bhadarwah have switched from traditional maize and paddy to growing of different shades of yellow coloured marigold in a big way and are exporting at 200 quintals a day to the city of temples- Jammu since June this year.

This is because during the summers the supply from plains gets dried up from May to November due to hot weather and in the same period yellow flowers start blooming in the hills of Bhadarwah which has comparatively cold climatic conditions thereby meeting the demand.

The yellow coloured marigold flower is key to many Hindu religion festivities.

Jammu being the city of temples with a footfall of hundreds of devotees every day leads to a massive requirement for the marigold flower.

The flower growers of Gajoth Panchayat in Kellar Valley who alone supply 100 quintals of marigold every day claimed that after switching to marigold farming their income has increased quadruple times.

When the then CEO Bhadarwah Development Authority Talat Parvez  Rohella had introduced Marigold in Kellar Valley, very few farmers showed interest to grow the crop owing to certain difficulties in cultivating it and the costs involved in it.

But, Hind Bhushan, a progressive farmer from Gajoth village and a member of Kissan Advisory Board, ventured into growing Marigold leaving traditional paddy and maize and has not left doing so for the last 14 years.

The progressive farmers have also formed a cooperative so that they can manage the hassle-free supply of the flowers to the market according to the demand and without exploitation of the mediators.

"To reap in maximum benefits and to avoid the cut of middlemen, we have formed a cooperative and have also bought a load carrier of our own for timely and smooth supply of our yield to the Jammu Mandi," said Devinder Kotwal  Sarpanch Gajoth Panchayat.

The supply of the yellow flower from the hills starts from June up to the Diwali festival in the first week of November.