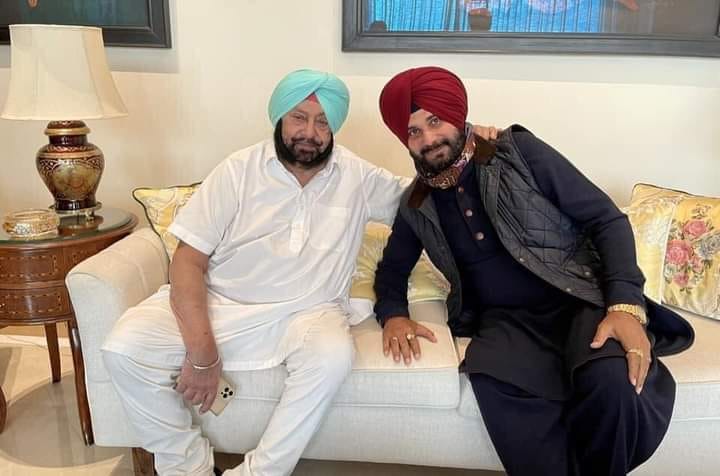 Sidhu is a 'friend of Pakistan', will oppose if he is appointed CM: Amarinder Singh

Chandigarh/UNI: Captain Amarinder Singh, who resigned as the chief minister of Punjab on Saturday, accused his rival and state Congress chief Navjot Singh Sidhu of being a friend of Pakistan, and said he should not be appointed the chief minister.

"He attended the swearing in ceremony of (Pakistan Prime Minister) Imran Khan, gave a hug to (Pakistan Army chief General Qamar Javed) Bajwa when our soldiers were being killed," Singh said, slamming Sidhu.

"It is for Congress to decide who they want to appoint as the chief minister, but if they appoint Sidhu I will oppose," he said, adding that he had warned party president Sonia Gandhi about Sidhu.

“I know his relations with the Pakistan leadership. He has a strong friendship with Imran Khan and Bajwa. We share a 600-km border with Pakistan so every day they supply RDX, arms and ammunition... It is a national security issue, so I will definitely oppose Sidhu as next Punjab CM,” he said.

"I had opposed his appointment as the state party president. I also met Sonia Gandhi. He is taking Punjab in a different direction. I said it is better to relieve me, but they had asked me not to resign," the outgoing chief minister.

He added that his decision whether to continue in Congress or not will also depend on who succeeds him.

Asked what happened in his conversation with Sonia Gandhi, he said he questioned her about a meeting of the Congress Legislature Party being called without asking him.

"It shows a lack of confidence in me," he said.

He said he offered the Congress president to tender his resignation and she asked him to go ahead with it.

“I spoke to the Congress president today and informed her about my resignation. It was the third time within two months when MLAs were called to Delhi for a meeting. It is very unfortunate. It shows mistrust on me,” Amarinder said.

He also said Sidhu has no magic wand, and cannot change anything.

“Sidhu has no magic wand to solve the problems. I know him very well. He could not handle a ministry properly. Sidhu is going to be a disaster,” he said.

Congress sources said the decision was taken after getting a feedback from MLAs and party workers.