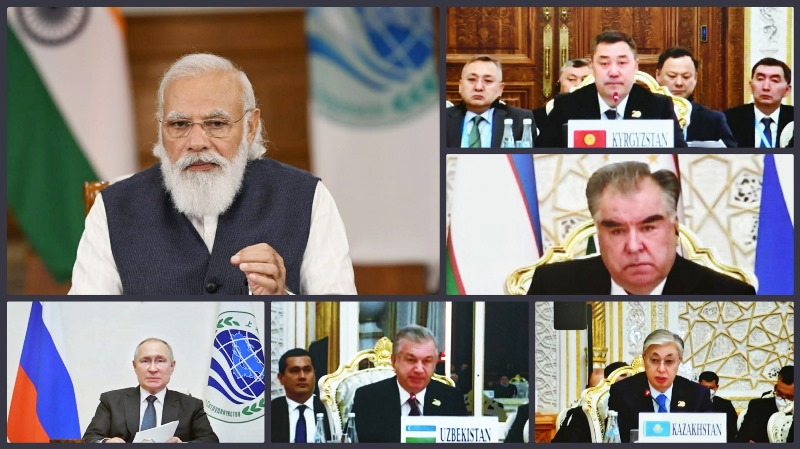 Modi virtually participates in 21st Meeting of the Council of Heads of State of SCO, reiterates India's solidarity with Afghan people

New Delhi:  Prime Minister Narendra Modi participated virtually in the 21st Meeting of the Council of Heads of State of the Shanghai Cooperation Organisation (SCO), and through video-message in the Joint SCO-CSTO Outreach Session on Afghanistan where he reiterated India's solidarity with the Afghan people.

The 21st meeting of the SCO Council of Heads of State was held on 17 September 2021 in Dushanbe in hybrid format.

The meeting was chaired by Emomali Rahmon, the President of Tajikistan.

In his address, Prime Minister highlighted the problems caused by growing radicalisation and extremism in the broader SCO region, which runs counter to the history of the region as a bastion of moderate and progressive cultures and values.

He noted that recent developments in Afghanistan could further exacerbate this trend towards extremism.

He suggested that SCO could work on an agenda to promote moderation and scientific and rational thought, which would be especially relevant for the youth of the region.

He also spoke about India's experience of using digital technologies in its development programmes, and offered to share these open-source solutions with other SCO members.

While speaking about the importance of building connectivity in the region, Prime Minister stressed that connectivity projects should be transparent, participatory and consultative, in order to promote mutual trust.

The SCO Summit was followed by an Outreach session on Afghanistan between SCO and the Collective Security Treaty Organisation (CSTO).  Prime Minister participated in the outreach session through a video-message.

In the video message, Prime Minister suggested that SCO could develop a code of conduct on 'zero tolerance' towards terrorism in the region, and highlighted the risks of drugs, arms and human trafficking from Afghanistan.

Noting the humanitarian crisis in Afghanistan, he reiterated India's solidarity with the Afghan people.