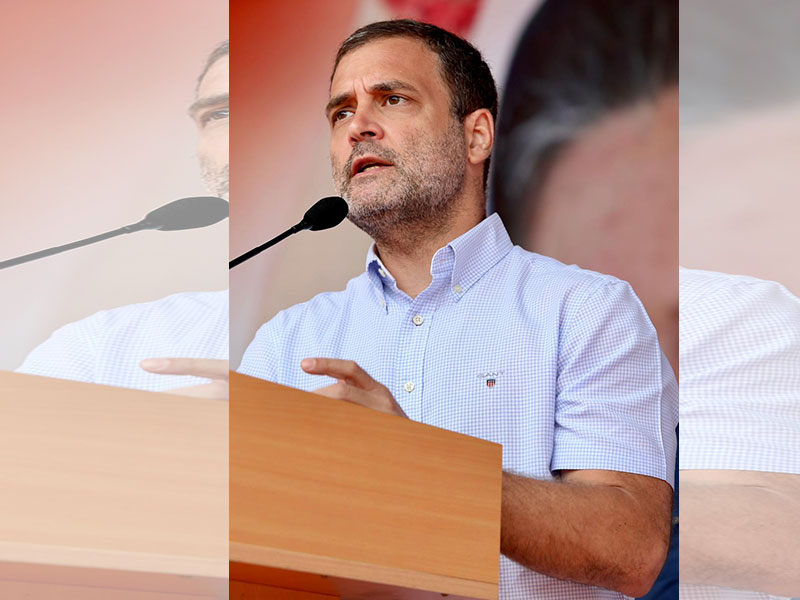 Jammu/IBNS: Congress leader Rahul Gandhi on Friday asked the party workers to chant 'Jai Mata Di', which literally means 'Hail the Mother Goddess', while addressing a public gathering at a stage in Jammu.

The 51-year-old politician is on a two-day visit to Jammu and travelled to the Vaishno Devi shrine from Katra on foot on Thursday.

In a video released today, he can be seen exhorting people at the gathering to chant 'Jai Mata Di' with a smile but seemingly lacking enthusiasm and energy  that is usually palpable in the devotees.

Not happy with the mild response, Gandhi went on to say 'boliye, boliye (say, say) before repeating the chant a little louder and getting a better response.

On Thursday, the Congress leader walked the 14-km stretch from Katra to the Vaishno Devi shrine. He was seen walking briskly surrounded by security personnel and Congress workers lined the pathway with party flags in their hands.

However, Gandhi has attracted criticism for allegedly visiting the shrine ahead of key elections. Critics have said there has been an increase in his display of religiosity with moves such as temple visits and disclosure by aides of his Bramhin ancestry, according to NDTV.

The Communist Party of Indian (Marxist), which has allied with the Congress in many state elections like West Bengal, Bihar, Jharkhand, has accused Rahul Gandhi of using :soft Hindutva" to gain political mileage and dismissed his efforts labeling them "a feeble effort to match the BJP".