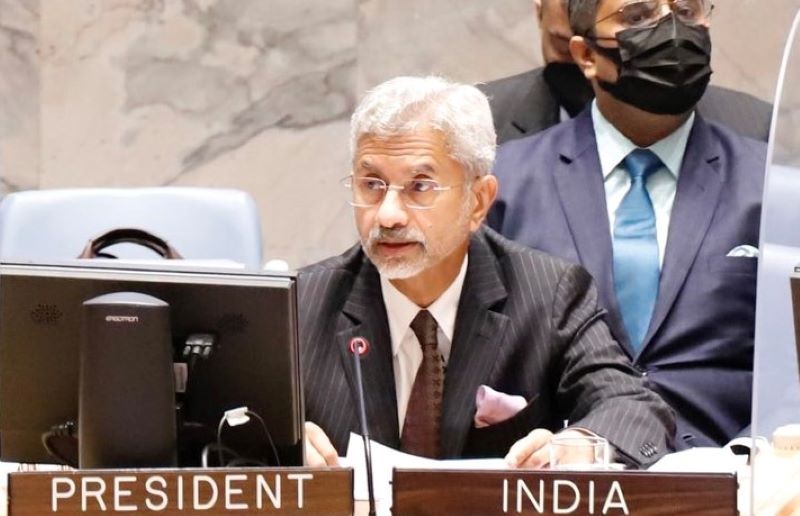 End game in Afghanistan was not something that anybody saw coming: EAM Jaishankar

New Delhi/UNI: External Affairs Minister S Jaishankar said that “the end game” in Afghanistan “was not something which anybody saw coming” and it wasn’t what the world was prepared for.

Answering a question at the end of his remarks at the Australian National University’s JG Crawford Oration 2021 on the topic ‘Why Quad Matters’ on Monday, Jaishankar also said that the UN Security Council resolution on Afghanistan passed last month, when India was holding the presidency, was part of important steps taken by India on Afghanistan.

He also said that while there are challenges ahead, this is the time when the international community “should actually come together and work in truly collective interest” on Afghanistan.

On the Taliban's lightning takeover of Kabul on Aug 15, he said, "It’s been understood for some years now that the US and its allies, that their presence would wind down in Afghanistan; it’s not something which happened overnight, it began, in fact people sometimes tend to forget, with president Obama. And it certainly had a roller-coaster time, like so many other things, under president Trump.

"But the fact was that for all the debate and deliberation on it, I think it would be a fair statement to assert that the end game was not something which anybody saw coming; it wasn’t exactly what was the scenario which anybody was really prepared for.”

On India’s position, he said, "It’s been now a little more than two weeks, and the initial focus has really been on evacuation, on getting people out, trying to see if Afghans can travel out; and but we have taken some important steps, and particularly I should emphasise that in the UN Security Council, this was the month when we were president, there has been a resolution passed 2593, which demands that Afghanistan’s territory should not be used for terrorism, which expects that the Taliban would live up to its promises, about inclusive government, promises about treatment of minorities, about women, children, which actually wants that the travel permission for the Afghans who wish to leave the country is given."

On the challenges ahead in Afghanistan, he said, "These are early days, and so wait; but the challenges are there for all of us to see, and to my mind what is most important at this time is we should try to overcome the natural temptation of diplomacy to score a point over the others and try and get ahead of the game.

"I think this is the time when the international community should actually come together and work in what is truly collective interest, because I think the UN resolution which I spoke about, I think it is a very, very balanced, very sensible sort of suggestion of the pathway that Afghanistan follows.”

On the question of the US’s chaotic withdrawal from Afghanistan on Aug 31, he said, "The other question on what does it do to American standing, in a way we all know what the last two weeks were, and I don’t think anybody can be in denial of the challenges that it has posed to everybody, but having said that the United States is the United States- it has deep strengths, it has a very unique, I will not just say standing, there is something that everybody knows intuitively, it has an extraordinary capacity to reinvent itself, reenergise itself, and we’ve seen that in history, after all remember, some variant of this debate would have also happened in the 1970s..”

“To me there is the immediate challenge of diplomacy and foreign policy, there are somewhat longer term judgements which all of us make, and I certainly would make that keeping in mind my understanding of the US over many, many years.”