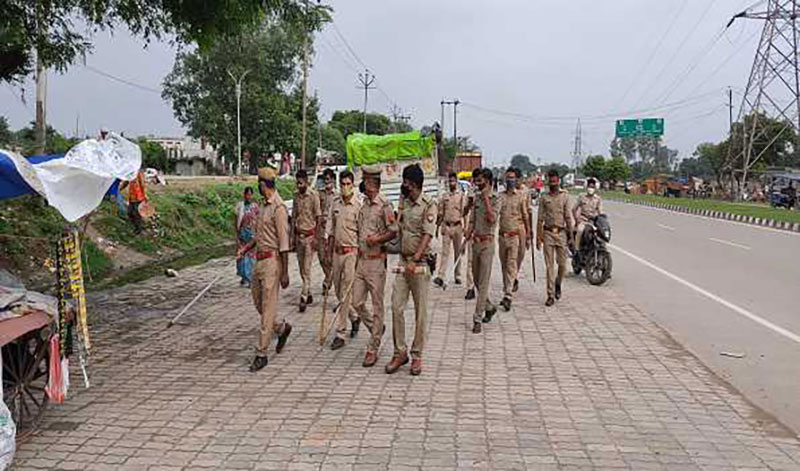 Ayodhya/UNI: The religious city of Ayodhya has turned into a virtual fortress ahead of the proposed visit of President Ram Nath Kovind on Sunday.

Security personnel have been deployed at the programme spots and the entire route the President's convoy would be covering.

Special security arrangements have been made at the Ram Janmabhoomi area particularly in Hanumangarhi and Ram Lalla temples.

Accompanied by his wife Savita Kovind, the President will reach Ayodhya from Lucknow by Presidential special train. UP Governor Anandiben Patel and Chief Minister Yogi Adityanath are also expected to reach the temple city by the same train and the VVIPs are slated to spend four hours in the city.

However , the people of Ayodhya on Sunday will have to face several restrictions due his visit.

Normal train services on Lucknow - Ayodhya route of 135 kms would be affected for around eight hours on the day while security forces are verifying credentials of those residing near the railway track through which the special train will pass.

At least 12 trains will be diverted or delayed on the route of the presidential train with security personnel deployed along the Lucknow-Ayodhya railway stretch.

District Magistrate Anuj Kumar Jha said here on Saturday that preparations to accord a grand welcome to the President have been completed.

"We have started decorating the Ayodhya railway station and the Ramkatha Park. The Hanumangarhi and Ram Lalla temples have also been decorated with flowers," he said.

The President will be welcomed with flowers at Ayodhya railway station and at least five quintals of flowers have been ordered by railways for display along the entire VIP route with buildings in the vicinity painted saffron to provide a religious look.

Railway authorities say that Ayodhya railway station’s platform number 1, where the presidential train will halt, has been decorated. A special vehicle will be stationed near the coach from where the President will alight. To accommodate other dignitaries, including the chief minister and governor, a VIP guest room has been erected on platform 1, replete with new furniture and other facilities.

District officials said the President will inaugurate the Ramayana conclave and other projects after offering prayers to Ram Lalla. Those in attendance must undergo a Covid test, at least 12 hours prior to the meet. Over 250 artistes will perform cultural programmes at eight different sites between Ayodhya railway station and Ram Katha Park.

Meanwhile, the Presidential special train, which is being prepared in New Delhi, will reach Lucknow by this evening.

Railway officials said one pilot engine in the front and another in the rear will go with the Presidential train to Ayodhya.

The train will have all technical staff along with additional 8 loco pilots and 6 guards.

In Lucknow, special security drills including checking of vehicles, passengers and their luggage have commenced at Charbagh station.