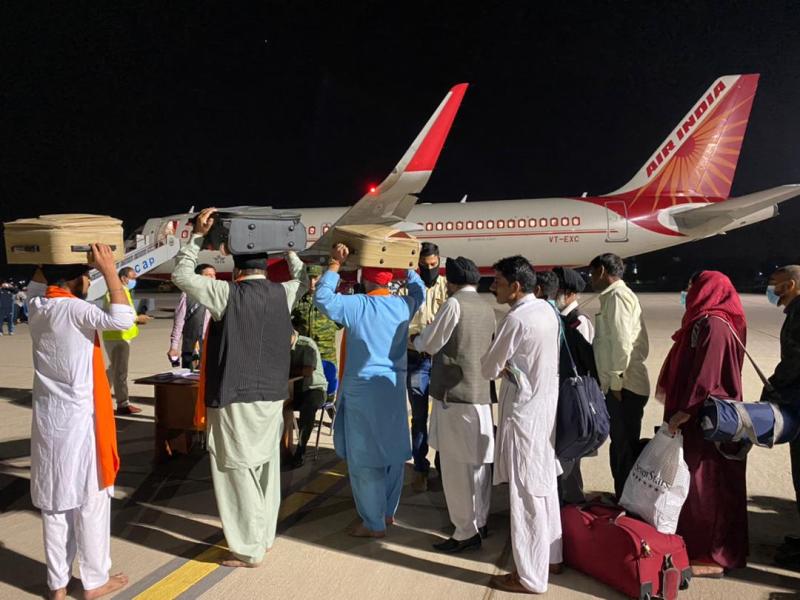 Afghans arriving in India will get six months visa: MEA

New Delhi/IBNS: Afghans arriving in India will get a visa for six months and the government "will take it" from there, the Ministry of External Affairs (MEA) said in a statement on Friday.

This comes as the Union Home Ministry announced that all Afghan nationals must travel to India only using e-Visa amid the present crisis situation in Afghanistan.

"So they (Afghans) are currently coming here under the six-month visa programme. We will take it from there. That's the current plan for six months. This is an evolving situation. Making long term plans have not been the best of ideas," said Ministry of External Affairs (MEA) Spokesperson Arindam Bagchi during a weekly press briefing.

India has evacuated over 550 persons from the war-torn country, including 260 Indian nationals, through six separate flights from Kabul.

Bagchi said the vast majority of Indians who wished to return have been brought back.

While answering queries at the regular press briefing, he said that more than 550 people have been evacuated either directly from Kabul or through Dushanbe, Tajikistan.

He said the 260 Indian nationals evacuated were besides the Indian embassy staff who were brought back on Aug 17, two days after the Taliban takeover of Afghanistan.

“Separately, the Government of India has also facilitated the evacuation of Indian nationals through other countries and partners,” he added

Helping in the safe return from Afghanistan.
AI 1956 enroute to Delhi from Dushanbe carrying 78 passengers, including 25 Indian nationals. Evacuees were flown in from Kabul on an @IAF_MCC aircraft.@IndEmbDushanbe pic.twitter.com/BcIWLzSLrL

“In this evacuation process, we were in touch with various countries, particularly the US, which is controlling Kabul airport. The government in Dushanbe, plus our military flights overflew certain countries such as Iran, as well as Uzbekistan.”

To a query on how many Indians were left in Afghanistan, he said that “this is a number that changes”.

“This is a number that changes, as we receive new information of people who contact us with a request to leave the country. There could be Indians there who may wish to continue in the country, we may not know that,” he added.

The spokesperson said that some Indians “find other routes to other destinations”.

“Some of them have gone to other countries, and we are aware of that. In fact we have facilitated some of that, and we have been in touch with other friends, who are our partners, who have pulled them out. Our overall assessment is that the vast majority of Indians who wished to return have been evacuated,” the spokesperson added.

He added that there could be some more Indians likely to be in Afghanistan, adding “I don’t have an exact number for that”.

Asked if evacuations would continue after August 31, when the US and UK are to complete their withdrawal, he said: “Look we are aware of the very difficult situation on the ground right now, and we are in touch with various parties, regarding when we can mount such evacuation flights, and we share details as we go ahead.”

On India’s policy on evacuation, he said, “Our primary focus continues to be on evacuation of Indian nationals. We had issued a number of advisories to Indians to leave, nevertheless some Indians remained there, even after our embassy personnel were brought back.”

He said in addition, India has been able to bring out some Afghan nationals as well as nationals from some other countries.

“Of the Afghan nationals, many of them were Sikh community and Hindus. But primarily we will continue with the focus there on evacuation of Indian nationals; but we will also stand by Afghans who stood by us, as our minister has already said,” he added.