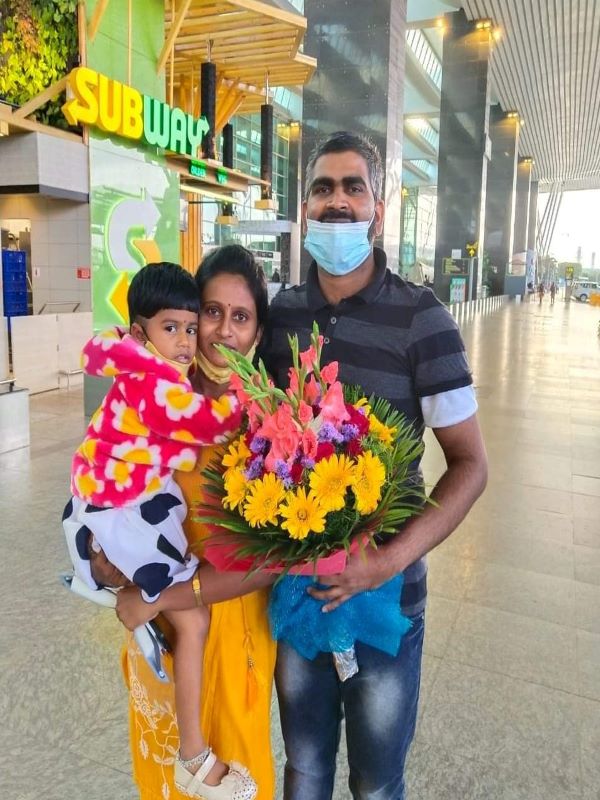 Bengaluru/IBNS: A man from Karnataka returned from Saudi Arabia after spending 600 days in jail over allegations of blasphemy and derogatory Facebook messages about Mecca and the king of Saudi Arabia.

Thirty-four-year-old Harish Bangera, an air-conditioning technician, was arrested on charges of blasphemy, on December 22, 2019. However, an investigation by the Karnataka Police revealed that two men had created a fake Facebook account, impersonating Bangera, and posted the comments that led to his arrest.

Bangera landed at Kempegowda International Airport in Bengaluru on Wednesday.

Welcome Back dear Harish Bangera, We are always with you.

Thank you so much Sri @DrSJaishankar Sir & Sri @VMBJP Ji.

Abdul Huyez and Abdul Thuyez, residents of Udupi district, had created the Facebook account in Bangera's name and wrote the derogatory comments, they admitted to the police after their arrest in October 2020.

With the help of the findings of the investigation, Bangera’s family managed to get him released.

“I can’t thank enough those who helped secure my release. The Udupi Police’s report proved my innocence. They worked hard after releasing that I had been framed. If it wasn’t for Covid-19, I would have been released much earlier. All the documents were submitted, but the courts were closed due to Covid-19,”  Bangera was quoted as saying by Hindustan Times.

After Bangera was released from jail, his employer asked him to resume work at the company but he wanted to be with his family back in India.

Why was Bangera framed?

Udupi Police revealed that he had written some posts on the Citizenship (Amendment) Act, which led to some issues. He later deleted the post and apologised.

The fake Facebook account and offensive posts to land him in jail were made by Abdul Huyez and Abdul Thuyez as a retaliation against Bangera.

Police sought Facebook's help to know if the investigation was on the right track and after confirmation, the actual perpetrators were traced and arrested.

The case is under trial now.

After the Udupi Police, through Director General and Inspector General of Police Praveen Sood and the Indian embassy in Saudi Arabia, informed the Saudi Arabian government about the arrest, Bangera was released, police added.